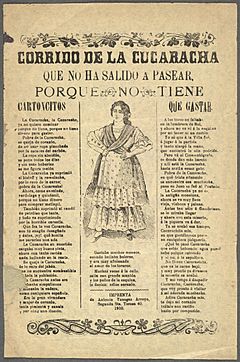 La Cucaracha ("The Cockroach") is a traditional Spanish folk song. It is unknown when the song came about. It is also very popular in Latin America. In Mexico, it was performed widely during the Mexican Revolution. Many alternative stanzas exist. The basic song describes a cockroach who cannot walk.

The song consists of verse-and-refrain (strophe-antistrophe) pairs, with each half of each pair consisting of four lines featuring an ABCB rhyme scheme.

The song's earliest lyrics, from which its name is derived, concern a cockroach that has lost one of its six legs and is struggling to walk with the remaining five. The cockroach's uneven, five-legged gait is imitated by the song's original,

("The cockroach, the cockroach / can no longer walk / because she doesn't have, because she lacks / the two hind legs to walk"; these lyrics form the basis for the refrain of most later versions. Syllables having primary stress are in boldface; syllables having secondary stress are in roman type; unstressed syllables are in italics. Measure divisions are independent of text line breaks and are indicated by vertical barlines; note that the refrain begins with an anacrusis/"pickup".)

Many later versions of the song, especially those whose lyrics do not mention the cockroach's missing leg(s), extend the last syllable of each line to fit the more familiar 6/4 meter. Almost all modern versions, however, use a 4/4 meter instead with a clave rhythm to give the feeling of three pulses.

All content from Kiddle encyclopedia articles (including the article images and facts) can be freely used under Attribution-ShareAlike license, unless stated otherwise. Cite this article:
La Cucaracha Facts for Kids. Kiddle Encyclopedia.