Colima officially the Free and Sovereign State of Colima, is one of the 31 states that, with the Federal District, make up the 32 Federal Entities of Mexico. It shares its name with its capital and main city, Colima.

Colima is a small state of Western Mexico on the central Pacific coast, with the four oceanic Revillagigedo Islands. Mainland Colima shares borders with the states of Jalisco and Michoacán. In addition to the capital city of Colima, the main cities are Manzanillo and Tecomán. Colima is the fourth smallest state in Mexico and has the smallest population, but has one of Mexico’s highest standards of living and lowest unemployment.

Colima’s territory includes the Revillagigedo Islands—Socorro, San Benedicto, Clarión, and Roca Partida. These are under federal jurisdiction but are considered part of the municipality of Manzanillo.

Politically, the state is divided into ten municipalities. Natural geography divides the state into a northern and southern region. The north has a cooler climate due to the higher mountains. The south is hotter and includes the Pacific Ocean coastline.

Colima’s most important tourism destination is the beaches of Manzanillo, which is popular among those in western Mexico as well as many sports fishermen. Historically, the port was the point of departure for various maritime expeditions and received the annual Manila Galleon from the Philippines.

It has called itself the "World Capital of the Sailfish" since 1957 when 336 species were caught off its shores. The abundance of this fish along with marlin has made it a popular destination with sports fishermen and the city holds the annual Dorsey International fishing tournament.

The second most important destination is the small town of Comala, a small traditional town near the capital of Colima. Comala was named a "Pueblo Mágico" in 2002 because of its natural surroundings and traditional architecture, which its downtown declared a historic monument. Since 1962, all the buildings in the town have been painted white and most have red tile roofs, giving it the nickname of "White Village of America." 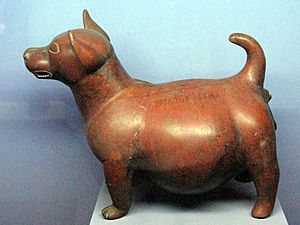 Ceramic dog, found in a Colima (Mexico) shaft tomb. The dog is on display at the Tamayo Museum, Oaxaca, Mexico

A very early culture in Colima was Capacha culture, developing in the region between 2000 and 1200 BCE.

El Chanal is located four km north of the city of Colima. It is a complex of pyramid platforms with stairs, a Mesoamerican ballcourt and a number of plazas. A distinctive feature of the site are stones with glyphs that are found on stairways.

La Campana is in the urban area of Villa de Álvarez. It is a ceremonial center with various temples and pyramidal platforms with rounded edges. At least one of the platforms was used as a mausoleum with the tomb inside still visible.

The state has 307 preschools, 510 primary schools, 131 middle schools and 57 high school and vocational level schools. Today, over 85% of the population finishes primary school. Higher education consists of a number of technological schools, universities and teachers’ colleges. Just over half of these are located in the city of Colima.

The University of Colima was founded in 1940, following the educational philosophy of President Lázaro Cárdenas meant to provide higher education to the poorer classes. Today, the university offers high school level classes along with undergraduate and graduate degrees. Much of the institution’s current size and offering is due to growth in the 1980s, and during that time its reputation in Mexico and abroad increased. Most of the university’s majors are concentrated in agriculture, industry and commerce with aim of enhancing Colima’s economy.

All content from Kiddle encyclopedia articles (including the article images and facts) can be freely used under Attribution-ShareAlike license, unless stated otherwise. Cite this article:
Colima Facts for Kids. Kiddle Encyclopedia.