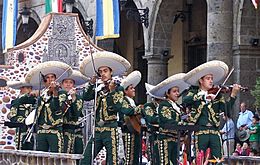 Mariachi is a Latin music genre. It is popularized in Mexico and its culture. This type of music includes instruments such as the violin, trumpet, guitar, vihuela, guitarrón and sometimes a harp. Mariachi is sung and performed mostly in bands. However, some solo artists such as Selena and Alejandro Fernández have recorded and performed Mariachi songs. 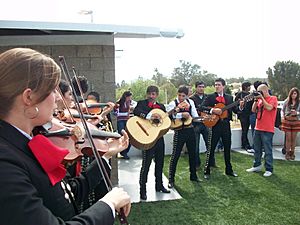 The size of a Mariachi group varies depending on the availability of musicians. The usual mariachi group today consists of as many as eight violins, two trumpets and at least one guitar. Traditional mariachi guitars include the vihuela, a high-pitched, round-backed guitar that provides rhythm, and a bass guitar called a guitarrón, which also provides rhythm. Sometimes a Mexican folk harp provides bass and ornaments the melody. All are Mexican variations of European instruments. There is generally no lead singer as in other kinds of group with all players singing choruses and taking turns singing the lead. Often the lead singer is assigned to a certain song due to voice qualities. Mariachi vocalization shows influences from a number of styles such as bolero (a romantic style), huapango (using falsetto), son jalisciense (an aggressive style) and more. Voices must be strong to be heard over amplified instruments. Vocal style emphasizes operatic qualities and instrumental performance demonstrates a level of virtuosity that reflects advanced musical training. Historically, mariachi groups have been made up of men but there is growing acceptance of female mariachis. 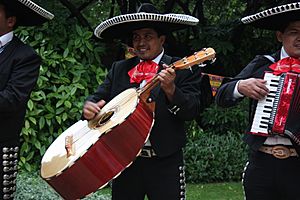 As mariachi groups are expected to play requests, they may need to know hundreds of different songs. Most songs are about machismo, love, betrayal, death, politics, revolutionary heroes and even animals and country life from the genre origins as rural son music. One particularly famous song is “La Cucaracha” (The Cockroach).

Most mariachi groups are associated with family and religious celebrations along with serenades. One of the most common pieces played by Mariachis is “Las Mañanitas” for birthdays and celebrations of patron saints.

In Mexico, mariachi music can also be found as part of Catholic Mass. The Misa panamericana is a mariachi folk mass sung in Spanish with new arrangements of classic hymns such as "Kyrie Eleison". This innovation began in 1966 by Canadian priest Jean Marc Leclerc and it moved from a small church to the Cuernavaca Cathedral. 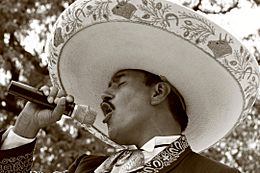 All content from Kiddle encyclopedia articles (including the article images and facts) can be freely used under Attribution-ShareAlike license, unless stated otherwise. Cite this article:
Mariachi Facts for Kids. Kiddle Encyclopedia.