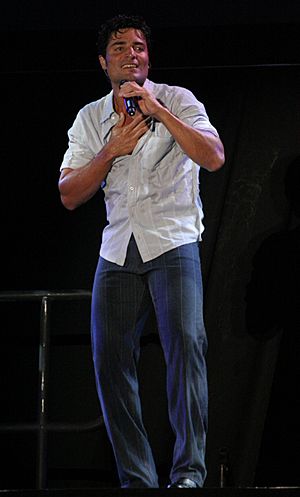 Elmer Figueroa Arce (born June 28, 1968 ) is a Puerto Rican Latin pop singer. He is best known by his stage name Chayanne. He has released 21 studio albums. He has also sold over 30 million albums worldwide. Figueroa's nickname "Chayanne" was given to him by his mother. This was because he liked the 1960s television series Cheyenne. In the 1970s, Chayanne tried out for Menudo. The producers told him that he was too young to be in the group. Because of this, he joined another group called Los Chicos (the guys). They recorded several hit singles. These include "Puerto Rico Son Los Chicos" and "Ave Maria", which would later be recorded by Beyoncé Knowles. After the group separated in 1984, Chayanne started his solo career.

Chayanne signed with RCA Ariola. He released his first album Chayanne es mi Nombre (1984). His second album with RCA, Sangre Latina was released in April 1986. On May 5, 1987, Chayanne switched to Sony Music Latin. His self-titled album was released in that same year. The album features "Peligro de Amor" and "Fiesta en América" which ranked on the Billboard Hot Latin Tracks charts. On Noviember 1, 1988, Chayanne released another self-titled album. After its release, Pepsi wanted him to be their spokesperson. On August 7, 1990, his album Tiempo de Vals was given a Grammy Award nomination. Chayanne has also been in several TV programs since 1984.

All content from Kiddle encyclopedia articles (including the article images and facts) can be freely used under Attribution-ShareAlike license, unless stated otherwise. Cite this article:
Chayanne Facts for Kids. Kiddle Encyclopedia.