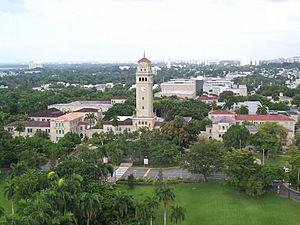 The University of Puerto Rico at Río Piedras campus. Its distinctive clock tower is a landmark of both the campus and Río Piedras. 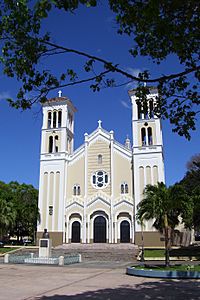 Río Piedras' origins go back to 1714 when a settlement along the shores of the Piedras river was recognized by Governor Juan de Rivera. Originally known as El Roble, it eventually adopted the name of the river that crossed its territory (Río Piedras in Spanish).

During the nineteenth century, most of its territory was used for agricultural and livestock-raising purposes. Sugar cane, cotton and coffee were some of the goods produced during this era at the municipality.

On May 12, 1903, the University of Puerto Rico was founded in Río Piedras. The university was a central part of the development of Rio Piedras, both in housing and economically. Even though the campus covers a very small portion of the territory, it is considered the unofficial symbol of the old town. The Río Piedras Campus is recognized as the main campus in the University of Puerto Rico system. The Botanical Gardens of the university are also located at Río Piedras.

The municipality became part of the capital city of San Juan on July 1, 1951, after the approval of Project 177 of the House of Representatives of Puerto Rico. Following the annexation of Rio Piedras, the city of San Juan, and its surrounding area now including Rio Piedras, quadrupled its former size. The last mayor of the municipality of Río Piedras was Ángeles Méndez de López Corver.

The flag of Río Piedras consists of a yellow cloth with a wavy blue stripe. The stripe has small white stones crossing it, and symbolizes the river that gave its name to the former town. The yellow background represents the sun, progress, and the future.

The region is mostly flat due to its location in the Northern Coastal Plains of the island. The highest regions are located at the south, mainly in the Caimito and Cupey barrios. The Río Piedras (or Piedras River) which gives name to the area crosses the region. 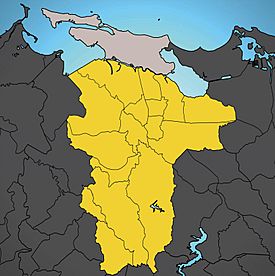 Río Piedras is divided into several barrios or districts: 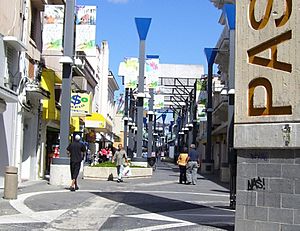 At the heart of Río Piedras lies the Avenida José de Diego, a one-kilometer pedestrianized street with stores and shops. The Río Piedras Plaza del Mercado (Marketplace) is the largest of its kind on the island and features a series of shops that offer goods and services.

Ponce de León Avenue is popular with bookstores and small theaters and with students, faculty, and intellectuals in the community.

Robert Clemente's house is located in Rio Piedras [1], where a memorial is visible in the back yard.

Río Piedras is perhaps more known for being the site of the main campus of the University of Puerto Rico. Located in downtown Río Piedras, the university has more than 20,000 students enrolled and a faculty of more than 1,000.

All content from Kiddle encyclopedia articles (including the article images and facts) can be freely used under Attribution-ShareAlike license, unless stated otherwise. Cite this article:
Río Piedras, Puerto Rico Facts for Kids. Kiddle Encyclopedia.