Joaquín Rafael Phoenix (born October 28, 1974). In his childhood he went by the name Leaf Rafael Phoenix from 1979 to 1989. At age 15, he adopted "Joaquín Rafael Phoenix" as his given name. He is an American actor, producer, and activist. For his work as an actor, Phoenix has received a Grammy Award, a Golden Globe Award, and has three Academy Awards and British Academy Film Award nominations.

Phoenix started acting in television shows with his brother River Phoenix and sister Summer Phoenix. His first major film release was in the comedy-drama film Parenthood (1989). During his period as a child actor he was credited as Leaf Phoenix, his self-given name. He later went back to his birth name, Joaquín, and received positive reviews for his supporting work in a wide range of films, most notably in the film adaptation of the novel To Die For (1995) and the period film Quills (2000).

He received international attention for his portrayal of Commodus in the 2000 historical epic film Gladiator, which earned him a nomination for the Academy Award for Best Supporting Actor. He has subsequently earned Best Actor nominations for portraying musician Johnny Cash in the biopic Walk the Line (2005). He and River Phoenix hold the distinction of being the only brothers to be nominated for acting Academy Awards.

Some of his other notable films include the satire film Buffalo Soldiers (2001), the science fiction thriller Signs (2002), the animated film Brother Bear (2003), the historical drama film Hotel Rwanda (2004), the psychological thriller The Village (2004), the documentary Earthlings (2005), the romantic drama Two Lovers (2008), the drama The Immigrant (2013), the romantic science fiction drama Her (2013), the crime comedy-drama film Inherent Vice (2014), and the thriller You Were Never Really Here (2017), for which he won the Cannes Film Festival Award for Best Actor. 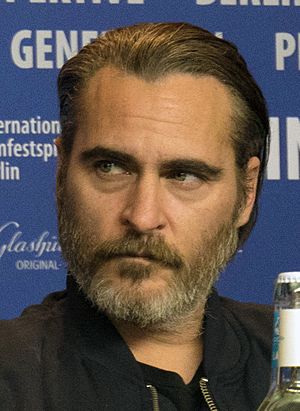 Aside from his acting career, he has ventured into directing music videos, as well as producing films and television shows. He has recorded an album, the soundtrack to Walk the Line, for which he won the Grammy Award for Best Compilation Soundtrack for Visual Media.

Phoenix is a social activist, lending his support to a number of charities and humanitarian organizations. He is on the board of directors for The Lunchbox Fund, a non-profit organization which provides daily meals to students of township schools in Soweto of South Africa. Phoenix is also known for his animal rights advocacy. He has been a vegan since the age of three and campaigns for PETA and In Defense of Animals.

All content from Kiddle encyclopedia articles (including the article images and facts) can be freely used under Attribution-ShareAlike license, unless stated otherwise. Cite this article:
Joaquin Phoenix Facts for Kids. Kiddle Encyclopedia.