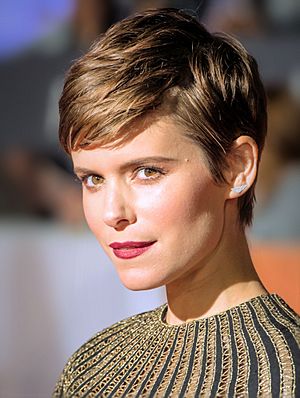 Kate Mara at the world premiere for "The Martian” 2015

Kate Rooney Mara was born and raised in Bedford, New York. Her parents are Timothy Christopher Mara, an NFL scout and vice president of the New York Giants for player evaluation, and Kathleen McNulty Mara (née Rooney). She is the second of four siblings.

Her paternal grandparents were Wellington Mara and Ann Mara. Wellington co-owned the Giants football team from 1959 until his death in 2005, and was succeeded by his son (Kate Mara's uncle), John Mara, who is currently President, CEO, and co-owner of the team. Kate Mara's maternal grandfather, Timothy James "Tim" Rooney, has run Yonkers Raceway in Yonkers, New York since 1972. 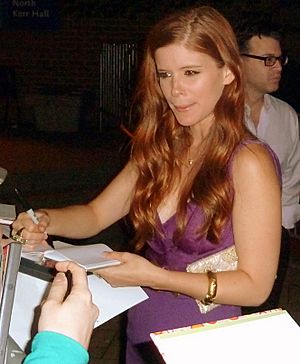 Mara began acting at the age of nine in a school musical. She attended several youth theater-arts schools and appeared in community theater and in school plays. Mara has described herself to Esquire magazine as having been "painfully shy" while growing up, adding that she only had one friend.

Her first audition was for the NBC police drama Homicide: Life on the Street. She did not get the role but knew from then on that she just wanted to act. Mara graduated from Fox Lane High School a year early and was accepted into the Tisch School of the Arts at New York University to study musical theater, but she eventually deferred her slot to work as an actress. She made her film debut in 1999 with Random Hearts. 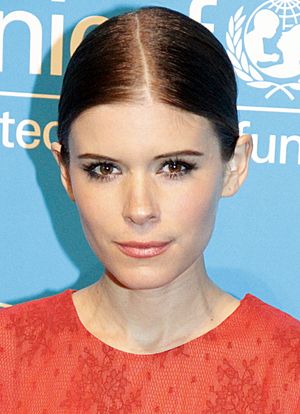 In late 2015, Mara began dating her Fantastic Four co-star Jamie Bell and in January 2017, the couple got engaged. On July 17, 2017, the couple announced that they had married. On January 9, 2019 it was reported that Mara and Bell were expecting their first child together.

Mara lives in Los Angeles and Manhattan. She credits her vegan diet and regular workouts for keeping herself fit. "I'm a massive animal lover, too," she explained. "Being vegan has been so good for me. I've never felt better."

Mara is one of the faces of the Humane Society of the United States. In 2015, she was featured in one of their campaign videos to promote Meatless Monday. 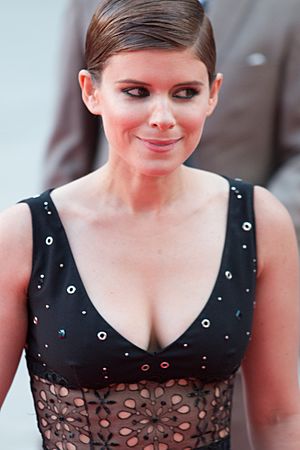 Kate Mara at the TIFF premiere of Man Down 2015 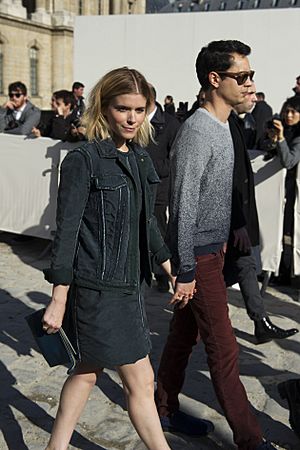 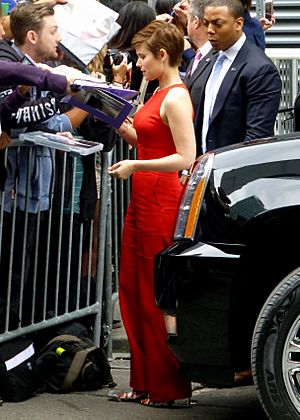 All content from Kiddle encyclopedia articles (including the article images and facts) can be freely used under Attribution-ShareAlike license, unless stated otherwise. Cite this article:
Kate Mara Facts for Kids. Kiddle Encyclopedia.