The town of Bedford is located in the northeastern part of Westchester County, and contains the three hamlets of Bedford Hills, Bedford, and Katonah.

The town of Bedford was founded on December 23, 1680, when 22 Puritans from Stamford, Connecticut, purchased a tract of land three miles square known as the "Hopp Ground" from Chief Katonah and several other Native Americans for coats, blankets, wampum and cloth.

Bedford was made a part of Connecticut in 1697 when a patent fixed the boundaries as a six-mile square. Only when King William III of England issued a royal decree in 1700 settling a boundary dispute did Bedford become part of New York.

The town served as the county seat of Westchester County during the American Revolutionary War after the Battle of White Plains, until Bedford was burned by the British in July 1779. After the Revolution, Bedford was made one of two seats of county government, alternating with White Plains, until 1870. Westchester County's oldest government building is the Court House in Bedford village, which was built in 1787 and renovated in the 1960s.

The Bedford Village Historic District, Caramoor Center for Music and the Arts, Palmer-Lewis Estate, and The Woodpile are listed on the National Register of Historic Places.

Bedford has a few minor landmarks, most of them centered on the Bedford Green, a small patch of green space at the center of the historical district (along Route 22). There is a small graveyard dating back to the founding of the town; the old one-room stone schoolhouse; and a few colonial-era houses, still lived in, which are kept painted white with black or green shutters. 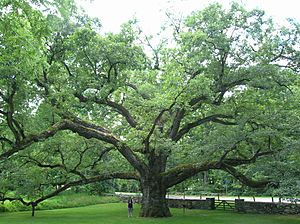 The Bedford Free Library is located in Bedford, on the Village Green, and is a member of the Westchester Library System. Bedford Hills and Katonah also have libraries that are members of the same system.

Along Route 22, at Hook Road, there is a large 300-plus-year-old oak tree known as the Bedford Oak.

The Bedford Hills Correctional Facility for Women is located in the town.

There were 5,731 households out of which 41.0% had children under the age of 18 living with them, 67.5% were married couples living together, 6.9% had a female householder with no husband present, and 23.3% were non-families. 18.8% of all households were made up of individuals and 7.6% had someone living alone who was 65 years of age or older. The average household size was 2.82 and the average family size was 3.21.

Communities and locations in Bedford

All content from Kiddle encyclopedia articles (including the article images and facts) can be freely used under Attribution-ShareAlike license, unless stated otherwise. Cite this article:
Bedford (town), New York Facts for Kids. Kiddle Encyclopedia.