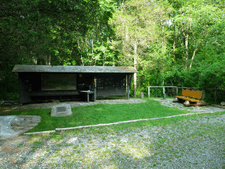 Entrance to the Mianus River Gorge

In 1954, Gloria and Anthony Anable reached out for help from The Nature Conservancy which pledged $7,500 to help purchase 60 acres (240,000 m2) of land in the gorge, its first land preservation purchase.

In 2007, The Nature Conservancy purchased eight acres (32,000 m2) of adjacent wetlands to protect the gorge and its watershed.

The gorge is a periglacial formation, carved by streams as the glacier retreated. It contains several types of bedrock including Bedford Augen Gneiss (an igneous intrusion from the Late Devonian period), Hartland Schist, Precambrian and Cambrian gneiss and quartzite. Cameron's Line passes through the preserve.

In 2003, the Preserve began to manage its deer population via limited bow hunting. They did so to decrease the risk of excessive deer populations causing damage to the vegetation. They believed that very small scale reductions could effectively manage the population without adversely affecting neighboring populations due to the rose petal hypothesis of deer populations.

There are numerous species of trees, shrubs, vines, herbs, and ferns within the preserve. 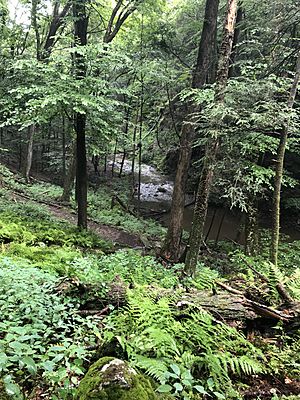 All content from Kiddle encyclopedia articles (including the article images and facts) can be freely used under Attribution-ShareAlike license, unless stated otherwise. Cite this article:
Mianus River Gorge Facts for Kids. Kiddle Encyclopedia.