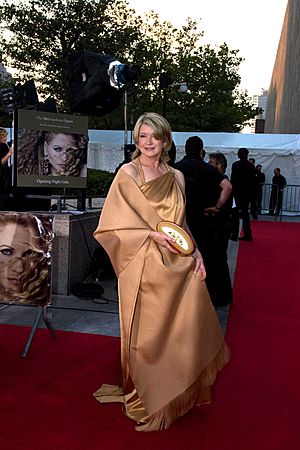 In 2004, Stewart was convicted of obstructing justice and lying to investigators about a stock sale. She served five months in a West Virginia prison. She was on ABC but moved to another channel. In May 2018, President Donald Trump said he was thinking about pardoning Stewart for her charges.

All content from Kiddle encyclopedia articles (including the article images and facts) can be freely used under Attribution-ShareAlike license, unless stated otherwise. Cite this article:
Martha Stewart Facts for Kids. Kiddle Encyclopedia.