The Chow Chow (sometimes simply Chow) is a dog breed originally from northern China, where it is referred to as Songshi Quan (Pinyin: sōngshī quǎn 鬆獅犬), which means "puffy-lion dog". The breed has also been called the Tang Quan, "Dog of the Tang Empire." It is believed that the Chow Chow is one of the native dogs used as the model for the Foo dog, the traditional stone guardians found in front of Buddhist temples and palaces. It is one of the few ancient dog breeds still in existence in the world today. 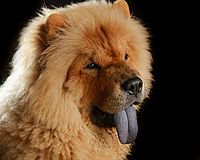 A close-up of the Chow Chow's characteristic blue-black tongue

The Chow Chow is a sturdily built dog, square in profile, with a broad skull and small, triangular, erect ears with rounded tips. The breed is known for a very dense double coat that is either smooth or rough. The fur is particularly thick in the neck area, giving it a distinctive ruff or mane appearance. The coat may be red, black, blue, cinnamon/fawn, or cream. Not all these color varieties are recognized as valid in all countries. Individuals with patchy or multicolored coats are considered to be outside the breed standard. Chow Chow eyes are typically deep set and almond shaped. The breed is distinguished by its unusual blue-black/purple tongue and very straight hind legs, resulting in a rather stilted gait. The bluish color extends to the Chow Chow's lips; this is the only dog breed with this distinctive bluish color in its lips and oral cavity (other dogs have black or a piebald pattern skin in their mouths). One other distinctive feature is the curly tail. It has thick hair and lies curled on its back. The nose should be black, but blue-coated Chow Chow can have a solid blue or slate-colored nose.

Most commonly kept as pets, Chow Chows tend to display discernment of strangers and can become fiercely protective of their owners and property. The American Kennel Club standards, however, consider an all-too aggressive or all-too timid Chow Chow to be unacceptable. For that reason, some owners have attributed a cat-like personality to the Chow Chow.

Chow Chow are not excessively active, meaning that they can be housed in an apartment. However, a Chow Chow living in an apartment will need daily exercise to prevent restlessness and boredom. Upon realizing that exercise is a daily occurrence, Chow Chow will tend to be more assertive with owners in anticipation of such activities.

This breed of dog has many strong loyal bonds with friends and family, but the Chow Chow dog is usually overly protective of one or two main family member(s). It is in the breed’s nature to be quiet and well behaved, but it is also resistant to training. Chow Chows become very stubborn and attach to certain individuals, as they age. This is why training them when they are puppies is so crucial because they gain respect for those who care for them.

Konrad Lorenz an Austrian zoologist, ethologist, and ornithologist, winner of the 1973 Nobel Prize who is often regarded as one of the founders of modern ethology, had a Chow Chow mix named Stasi. He wrote about his dogs in his book King Solomon's Ring.

Sigmund Freud had a Chow Chow named Jo-Fi who attended all of his therapy sessions because he felt that dogs had a special sense that allows them to judge a person's character accurately, and admitted he depended on Jo-Fi for an assessment of a patient's mental state.

Martha Stewart owns several chows, which are frequently seen on Martha's shows [1], one of them named Genghis Khan.

President Calvin Coolidge and his wife owned a black Chow named Timmy. Chow Chows were also popular in the 1930s and 1980s.

Elvis Presley and his ex-girlfriend Linda Thompson had a Chow Chow named Getlow. 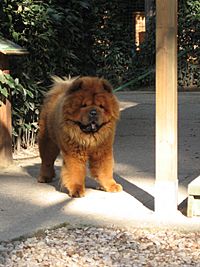 A Chow Chow with reddish coat. 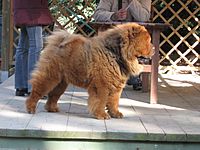 The Chow Chow's fur is particularly thick in the neck area, giving it a distinctive ruff or mane appearance.

Chow breed will heavily shed their fur in the seasons of spring and fall, which requires more grooming attention than other seasons. It is important that owners use the correct tool in order to avoid harming the skin and facilitate grooming. Three kinds of brushes that owners can use on their Chow Chow are a medium-coarse brush for the larger parts of the body, a slick brush for smaller areas, and a pin brush to maintain the longer strands of hair. Chow Chows are known to have either short and smooth coat, or a rougher and longer coat. Both create a thick woolly layer, as it gets closer to the skin. They should be brushed four times a week; however shedding seasons may require daily grooming. Also, a spray conditioner can help avoiding breakage and tearing to the thick coat of hair. Lastly, a monthly bath is required to avoid fleas and keep a clean coat of fur.

All content from Kiddle encyclopedia articles (including the article images and facts) can be freely used under Attribution-ShareAlike license, unless stated otherwise. Cite this article:
Chow Chow Facts for Kids. Kiddle Encyclopedia.