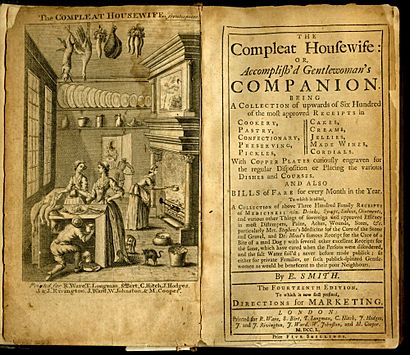 A cookbook or cookery book is a kitchen reference publication containing a collection of recipes, typically organized by type of dish.

Modern versions may also include colorful illustrations and advice on purchasing quality ingredients or making substitutions. Cookbooks can also cover a wide variety of topics, including cooking techniques for the home, recipes and commentary from famous chefs, institutional kitchen manuals, and cultural commentary.

Cookbooks that serve as basic kitchen references (sometimes known as "kitchen bibles") began to appear in the early modern period. They provided not just recipes but overall instruction for both kitchen technique and household management. Such books were written primarily for housewives and occasionally domestic servants as opposed to professional cooks, and at times books such as The Joy of Cooking (USA), La bonne cuisine de Madame E. Saint-Ange (France), The Art of Cookery (UK, USA), Il cucchiaio d'argento (Italy), and A Gift to Young Housewives (Russia) have served as references of record for national cuisines. 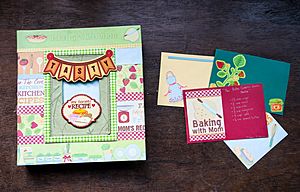 Cookbook also tell stories of the writers themselves and reflect upon the era in which they are written. They often reveal notions of social, political, environmental or economic contexts. For example, during the era of industrialization, convenience foods were brought into many households and were integrated and present in cookbooks written in this time. Related to this class are instructional cookbooks, which combine recipes with in-depth, step-by-step recipes to teach beginning cooks basic concepts and techniques. In vernacular literature, people may collect traditional recipes in family cookbooks. 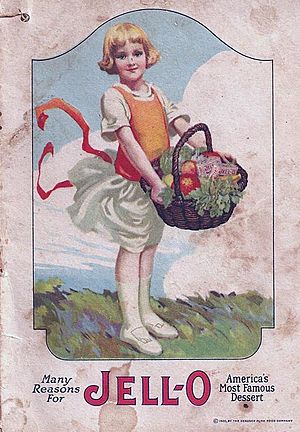 International and ethnic cookbooks fall into two categories: the kitchen references of other cultures, translated into other languages; and books translating the recipes of another culture into the languages, techniques, and ingredients of a new audience. The latter style often doubles as a sort of culinary travelogue, giving background and context to a recipe that the first type of book would assume its audience is already familiar with. Popular Puerto Rican cookbook, Cocina Criollo, written by Carmen Aboy Valldejuli, includes recipes that are typically of traditional Puerto Rican cuisine such as mofongo and pasteles. Valldejuli’s cookbook was not only important to Puerto Ricans, but also very popular in the United States where her original cookbook has since been published in several editions, including English versions.

Professional cookbooks are designed for the use of working chefs and culinary students and sometimes double as textbooks for culinary schools. Such books deal not only in recipes and techniques, but often service and kitchen workflow matters. Many such books deal in substantially larger quantities than home cookbooks, such as making sauces by the liter or preparing dishes for large numbers of people in a catering setting. While the most famous of such books today are books like Le guide culinaire by Escoffier or The Professional Chef by the Culinary Institute of America, such books go at least back to medieval times, represented then by works such as Taillevent's Viandier and Chiquart d'Amiço's Du fait de cuisine.

Single-subject books, usually dealing with a specific ingredient, technique, class of dishes or target group (e.g. for kids), are quite common as well. Jack Monroe for example features low budget recipes. Some imprints such as Chronicle Books have specialized in this sort of book, with books on dishes like curries, pizza, and simplified ethnic food. Popular subjects for narrow-subject books on technique include grilling/barbecue, baking, outdoor cooking, and even recipe cloning (Recipe cloning is copying commercial recipes where the original is a trade secret).

Community cookbooks (also known as compiled, regional, charitable, and fund-raising cookbooks) are a unique genre of culinary literature. Community cookbooks focus on home cooking, often documenting regional, ethnic, family, and societal traditions, as well as local history. Sondra Gotlieb, for example, wrote her cookbooks on Canadian food culture by visiting people and homes by region. She gathered recipes, observed the foodways, observed the people and their traditions of each region by being in their own homes. Gotlieb did this so that she could put together a comprehensive cookbook based on the communities and individuals that make up Canada. Gooseberry Patch has been publishing community-style cookbooks since 1992 and built their brand on this community.

Cookbooks can also document the food of a specific chef (particularly in conjunction with a cooking show) or restaurant. Many of these books, particularly those written by or for a well-established cook with a long-running TV show or popular restaurant, become part of extended series of books that can be released over the course of many years. Popular chef-authors throughout history include people such as Delia Smith, Julia Child, James Beard, Nigella Lawson, Edouard de Pomiane, Jeff Smith, Emeril Lagasse, Claudia Roden, Madhur Jaffrey, Katsuyo Kobayashi, and possibly even Apicius, the semi-pseudonymous author of the Roman cookbook De re coquinaria, who shared a name with at least one other famous food figure of the ancient world.

All content from Kiddle encyclopedia articles (including the article images and facts) can be freely used under Attribution-ShareAlike license, unless stated otherwise. Cite this article:
Cookbook Facts for Kids. Kiddle Encyclopedia.