Modern Cookery for Private Families is an English cookery book by Eliza Acton. It was first published by Longmans in 1845, and was a best-seller, running through 13 editions by 1853, though its sales were later overtaken by Mrs Beeton. On the strength of the book, Delia Smith called Acton "the best writer of recipes in the English language", while Elizabeth David wondered why "this peerless writer" had been eclipsed by such inferior and inexperienced imitators.

It was one of the first cookery books to provide lists of ingredients, exact quantities, and cooking times, and to include Eastern recipes for chutneys.

The book was well received on its first appearance; critics thought it the best cookery book they had seen, combining as it did clarity of instructions with excellent organisation. Acton's recipes and writing style have been admired by cooks including Bee Wilson, Elizabeth David, Delia Smith and Jane Grigson; Clarissa Dickson Wright praises her writing but criticises her increasing conformity to Victorian dullness.

The book was the result of several years of research, prompted by Longman, who had published Acton's Poems. Many of the recipes came from her friends. Modern Cookery quickly became a bestselling work, appearing in several editions and remaining a standard cookery book throughout the rest of the century. The book was immensely influential, establishing the format for modern cookery book writing, by listing the exact ingredients required for each recipe, the time needed, and potential problems that might arise. This was a major departure from previous cookbooks, which were less precise.

The book was one of the first to list recipes for Eastern "chatneys", both fresh, like her "Mauritian shrimp chatney" with lemon and oil, and preserved, like her "Bengal chatney" with raisins, crab apples, garlic, and ginger. It has been asserted that the book was the first to use the name "Christmas pudding", in the first edition of 1845; the dish had earlier been known simply as plum pudding. Her recipe for mincemeat (as in mince pies) still contained meat – she suggests ox tongue or beef sirloin – which she combined with lemons "boiled quite tender and chopped up entirely with the exception of the pips".

The book remained in print for over 50 years through most of the Victorian era, but it is Mrs Beeton's book, first published in 1861, which is now remembered from that period.

The title varied somewhat over the years; the 1845 edition's full title was

Modern Cookery, In All Its Branches: Reduced to a System of Easy Practice, for the Use of Private Families. In a Series of Practical Receipts, Which Have Been Strictly Tested, And are Given with the Most Minute exactness.

Modern Cookery, For Private Families, Reduced to a System of Easy Practice, In a Series of Carefully Tested Receipts, In Which the Principles of Baron Liebig and Other Eminent Writers Have Been as Much as Possible Applied and Explained.

Acton's book is divided into chapters with brief, often single word titles such as "Fish". In a marked departure from eighteenth century English cookery books like Hannah Glasse's The Art of Cookery, these are written as connected wholes. The chapter on fish begins with an essay on how to choose fish for freshness; there follows some advice on how to bake fish, and on the kinds of fat best used for frying fish. Suitable pans are illustrated. The recipes follow; these too are written as stories rather than simply as instructions. Where appropriate, recipes end with a list of ingredients, as well as the cooking time, in marked change from eighteenth century practice. Recipes are grouped, in the case of fish by species, and they form a connected story. Acton adds comments where she sees fit, indicating anything from when the food is in season to where a recipe came from, and how much she likes it. For example, she begins her account of the John Dory with a recipe which is more of an introductory essay than a set of instructions, though given the simplicity of the recipe, it says all that a cook would need to know on the matter: 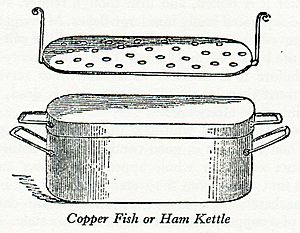 Wood engraving of "Copper Fish or Ham Kettle"
TO BOIL A JOHN DORY.
[In best season from Michaelmas to Christmas, but good all the year]

The John Dory, though of uninviting appearance, is considered by some persons as the most delicious fish that appears at table; in the general estimation, however, it ranks next to the turbot, but it is far less abundant in our waters, and is not commonly to be procured of sufficient size for a handsome dish, except in some few parts of our coast which are celebrated for it. It may easily be known by its yellow gray colour, its one large dark spot on either side, the long filaments on the back, a general thickness of form, and its very ugly head. It is dressed in the same manner, and served usually with the same sauces as a turbot, but requires less time to boil it. The fins should be cut off before it is cooked.

Acton follows this with an actual recipe, again characteristically simple, and with one of her brief parenthetical asides, at once modestly claiming ownership and praising the dish: 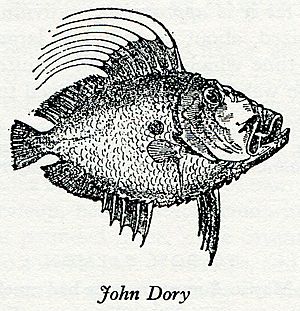 We have found these fish when they were too small to be worth cooking in the usual way, excellent when quite simply baked in the following manner, the flesh being remarkably sweet and tender, much more so than it becomes by frying or broiling. After they have been cleaned, dry them in a cloth, season the insides slightly with fine salt, dredge a little flour on the fish, and stick a few very small bits of butter on them, but only just sufficient to prevent their becoming dry in the oven; lay them singly on a flat dish, and bake them very gently from fourteen to sixteen minutes. Serve them with the same sauce as baked soles.
When extremely fresh, as it usually is in the markets of the coast, fish thus simply dressed au four is preferable to that more elaborately prepared by adding various condiments to it after it is placed in a deep dish, and covering it with a thick layer of bread crumbs, moistened with clarified butter.
The appearance of the John Dories is improved by taking off the heads, and cutting away not only the fins but the filaments of the back. 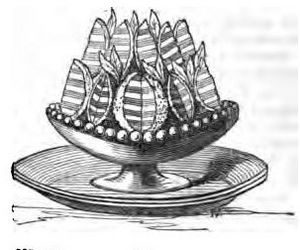 The book was from the first edition onwards illustrated with a large number of small woodcuts. Some show cookware, like the pot used to serve Bouillon or the "Mackerel Kettle", a deep oval saucepan with a lid, used to cook fish; some illustrate produce as the housekeeper would see it in the market, like the engravings of poultry and fish—educating the reader in the recognition of gurnard, sea bream, plaice, grey mullet, garfish, and sand-eel; others show finished dishes, like the Lady's Tourte or a moulded jelly, "tastefully garnished with preserved, or with fresh fruit."

The book appeared in the following editions during the Victorian era.

All content from Kiddle encyclopedia articles (including the article images and facts) can be freely used under Attribution-ShareAlike license, unless stated otherwise. Cite this article:
Modern Cookery for Private Families Facts for Kids. Kiddle Encyclopedia.