Myrica gale is a species of flowering plant in the family Myricaceae, native to Atlantic Europe and parts of northern North America. Common names include bog-myrtle, sweet willow, Dutch myrtle, and sweetgale.

Myrica gale is a deciduous shrub growing to 1–2 m tall. The leaves are spirally arranged, simple, 2–5 cm long, oblanceolate with a tapered base and broader tip, and a crinkled or finely toothed margin. The flowers are catkins, with male and female catkins on separate plants (dioecious). The fruit is a small drupe.

It typically grows in acidic peat bogs, and to cope with these difficult nitrogen-poor growing conditions, the roots have nitrogen-fixing actinobacteria which enable the plants to grow.

The foliage has a sweet resinous scent and is a traditional insect repellent, used by campers to keep biting insects out of tents. It is also a traditional component of royal wedding bouquets and is used variously in perfumery and as a condiment.

In Scotland, it has been traditionally used to ward off the Highland midge, and it is marketed as an insect repellent and as an ingredient in some soaps. 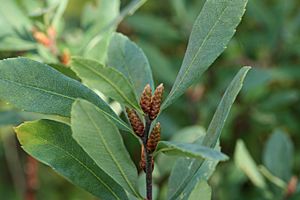 Sweetgale can grow in a narrow band in the intertidal zone, especially if logs have been washed into the estuary on which to establish itself. It is a favorite food of beavers, and low beaver dams can be found in the intertidal zone if sufficient sweetgale is present. The ponds thus formed are often completely submerged at high tide but retain enough water at low tide to provide refuge for fish. If too deep for predation by wading birds, juvenile salmon may flourish.

Queen Victoria was given a sprig of myrtle which she planted on the Isle of Wight. Her daughter used some of the plant that grew in her wedding bouquet, starting a royal tradition.

In north-western Europe (Germany, Belgium and the Netherlands), it was much used in a mixture called gruit as a flavouring for beer from the Middle Ages to the 16th century, but it fell into disuse after hops supplanted gruit herbs for political and economic reasons. In modern times, some brewers have revisited this historic technique and in Denmark and Sweden the plant is commonly used to prepare home-flavoured schnaps. In 2007 there were plans to increase production of the plant in Scotland for use as an essential oil for treating sensitive skin and acne. The plant has been listed as an abortifacient and therefore should not be consumed by women who are, or might be, pregnant.

All content from Kiddle encyclopedia articles (including the article images and facts) can be freely used under Attribution-ShareAlike license, unless stated otherwise. Cite this article:
Myrica gale Facts for Kids. Kiddle Encyclopedia.