Kids Encyclopedia Facts
This page is about the grouping of all provinces east of Manitoba. For the grouping of the Maritime Provinces with Newfoundland and Labrador, see Atlantic Canada. 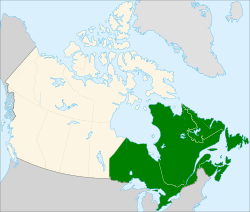 Eastern Canada (also the Eastern provinces) is generally considered to be the region of Canada east of Manitoba, consisting of the following provinces:

Ottawa, Canada's capital, is located in Eastern Canada, within the province of Ontario. The capitals of the provinces are in the list below.

The Canadian Press defines Eastern Canada as everything east of and including Thunder Bay, Ontario.

The total population of this region is about 23,082,460, or about 70% of Canada's population. Most of the population resides in Ontario and Quebec. The region contains 3 of Canada's 5 largest metropolitan areas, Toronto being the fourth largest municipality in North America.

The population of each province, from greatest to least is here.

All content from Kiddle encyclopedia articles (including the article images and facts) can be freely used under Attribution-ShareAlike license, unless stated otherwise. Cite this article:
Eastern Canada Facts for Kids. Kiddle Encyclopedia.