Kids Encyclopedia Facts
This page is about the city in Quebec, Canada. For other uses, see Sherbrooke (disambiguation).

Sherbrooke is a city in southern Quebec, Canada. Sherbrooke is situated at the confluence of the Saint-François (St. Francis) and Magog rivers in the heart of the Estrie administrative region. Sherbrooke is also the name of a territory equivalent to a regional county municipality (TE) and census division (CD) of Quebec, coextensive with the city of Sherbrooke. With 154,601 residents at the 2011 census, Sherbrooke was the sixth largest city in the province of Quebec and the thirtieth largest in Canada. The Sherbrooke Census Metropolitan Area had 201,890 inhabitants, making it the fourth largest metropolitan area in Quebec and nineteenth largest in Canada.

Sherbrooke is the primary economic, political, cultural and institutional centre of Estrie, and was known as the Queen of the Eastern Townships at the beginning of the 20th century.

There are eight institutions educating 40,000 students and employing 11,000 people, 3,700 of whom are professors, teachers and researchers. The direct economic impact of these institutions exceeds 1 billion dollars. The proportion of university students is 10.32 students per 100 inhabitants. In proportion to its population, Sherbrooke has the largest concentration of students in Quebec.

Since the nineteenth century, Sherbrooke has been a manufacturing centre. This segment of the economy has experienced a considerable transformation in recent decades as a result of the decline of the city's traditional manufacturing sectors. The service sector occupies a prominent place in the economy of the city, as well as a growing knowledge-based economy.

The Sherbrooke region is surrounded by mountains, rivers and lakes. There are several ski hills nearby and various tourist attractions in regional flavour. Mont-Bellevue Park, a large park in the city, is used for downhill skiing. 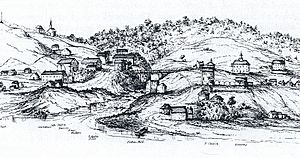 The First Nations were the first inhabitants, having originally settled the region between 8,000 and 3,000 years ago. Traces of seasonal camps, characterized by arrowheads, scrapers, and other similar tools have been found. Ceramic objects dating from the Woodland period (3000 to 500 BP) were also found, indicating that the region continued to be occupied by nomadic people during this period.

Upon the arrival of Samuel de Champlain in Quebec in 1608, this region was under the control of the Mohawks. France created an alliance through its missionaries with the Abenaki, located in Maine and Vermont. The French were driven to the valley of the St. Lawrence River near Trois-Rivières after a Mohawk victory in the war of 1660. Seeking to obtain control of the territory, the area around present-day Sherbrooke was a battlefield between the two peoples who had to travel to the region.

During the Seven Years' War between France and Britain, the Abenaki, still allied with the French, travelled along the rivers of the Eastern Townships, frequently near present-day Sherbrooke during British raids. The Treaty of Paris was signed in 1783, ending the war, and soon after its recognition came the Independence of the United States. The Eastern Townships were under Abekani control for a few years, having practised hunting and fishing for centuries. However, the American Revolution attracted loyalists to the region who began to covet the land and obtain government grants.

The first European settler to reside in the Sherbrooke region was a French Canadian named Jean-Baptiste Nolain, of whom few details are known, except that he arrived in 1779 to engage in agriculture. 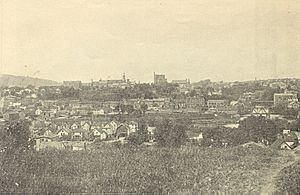 The first attempts at colonization occurred in 1792 on the banks of the St. Francis River. This settlement was known as Cowan's Clearance. In 1793, loyalist Gilbert Hyatt, a farmer from Schenectady, New York, established his farm not far from the confluence of the Massawippi River and Coaticook River, before the governor of Lower Canada officially awarded the land. In the next two years, 18 families came to live on the site. The Crown acknowledged Hyatt's ownership of the land in 1801. Hyatt built the first dam on the Magog River, in collaboration with another loyalist named Jonathan Ball, who had bought land on the north bank of the river. Hyatt then built a gristmill in 1802 on the south bank of the river, while Ball built a sawmill on the north shore. By constructing the mill, Hyatt effectively founded the small village that became known as "Hyatt's Mills". The village was named "Hyatt's Mills" until 1818 when the village was renamed after Governor General Sir John Sherbrooke at the time of his retirement and return to England.

In 1832 Sherbrooke attracted most of the activities of the British American Land Company (BALC) and benefited from the injection of British capital into the region. Manufacturing activities were established that harnessed the Magog River's hydropower. From 1835 Sherbrooke began to seek government support to establish a railway line, but this only became a reality in 1852 through the line connecting the cities of Montreal and Portland.

The second half of the nineteenth century saw the establishment of academic institutions which transformed Sherbrooke into a college town.

King George VI and Queen Elizabeth visited the city by train on 12 June 1939. Over 100,000 people were estimated to be in the crowd that greeted them. They were there to build goodwill for the British Empire before they confronted Nazi Germany and the Axis Powers during World War II.

As part of the 2000–2006 municipal reorganization in Quebec, the city grew considerably on 1 January 2002, with the amalgamation of the following towns and municipalities: Sherbrooke, Ascot, Bromptonville, Deauville, Fleurimont, Lennoxville, Rock Forest, and Saint-Élie-d'Orford. Part of Stoke was also annexed to the newly expanded Sherbrooke. 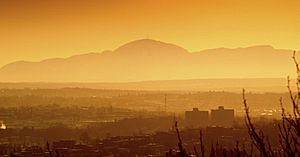 Located at the confluence of the Saint-François (St. Francis) and Magog rivers in the heart of the Eastern Townships and the Estrie administrative region. Sherbrooke is also the name of a territory equivalent to a regional county municipality (TE) and census division (CD) of Quebec, coextensive with the city of Sherbrooke. Its geographical code is 43.

Sherbrooke is the seat of the judicial district of Saint-François. 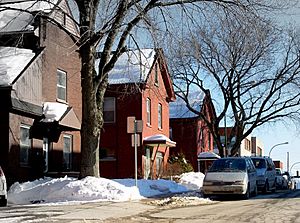 In 2002, Sherbrooke merged with most of the suburban municipalities in the surrounding area: Rock Forest, Saint-Élie-d'Orford, Deauville, Fleurimont, Bromptonville, Ascot, and Lennoxville. This resulted in the creation of six boroughs for the city: Brompton, Fleurimont, Lennoxville, Mont-Bellevue, Rock Forest–Saint-Élie–Deauville, and Jacques-Cartier. 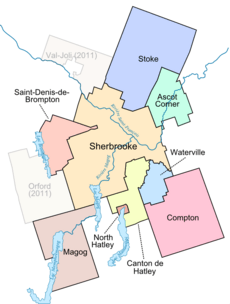 The CMA was defined slightly differently in 2006: it did not include Orford or Val-Joli. The remainder of this section applies to the 2006 census, since the applicable 2011 census figures are not yet available as of May 2012.

Indigenous peoples comprised just over 0.6% of the population.

French was mother tongue to 90.6% of residents (counting both single and multiple responses). The next most common mother tongues were English at 5.6%, Spanish at 1.3%, Arabic and Serbo-Croatian languages at 0.6% each, Persian at 0.4%, Niger–Congo languages at 0.3%, and Chinese and German at 0.2% each. (Percentages may total more than 100% owing to rounding and multiple responses).

About 87% of the population identified as Roman Catholic in 2001 while 6% said they had no religious affiliation, 1.2% were Anglican, 0.8% Muslim, 0.8% United Church, 0.7% Baptists, 0.5% Eastern Orthodox and 0.3% Jehovah’s Witnesses. Pentecostals and Methodists accounted for 0.2% each, while Buddhists, Presbyterians, Seventh-day Adventists, Mormons and Plymouth Brethren accounted for 0.1% each. 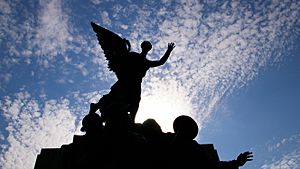 The Sherbrooke War Memorial by George William Hill is a cenotaph erected in 1926 to commemorate the soldiers who were killed during World War I. This piece of cultural heritage has become emblematic of the City of Sherbrooke.

In the summer season, several festivals, concerts, and events are held in the city, such as the Fête du Lac des Nations, Sherblues & Folk, and the Festival des traditions du monde. Come winter, the city hosts the Carnaval de Sherbrooke.

The city has British architectural heritage, as seen in the buildings in Vieux-Nord.

The city has the fourth largest theatre in Quebec, the Maurice O'Bready University Cultural Centre of Sherbrooke. Music, theatre, and dance shows are staged there. The Centennial Theatre of Bishop's University also hosts music and dance concerts from around the world. The Vieux Clocher, owned by the Université de Sherbrooke, has two stages, the primary being used by various music groups and comedians from around the province. The Théâtre Granada, designated as a historical site by the Canadian government, holds music concerts. It has retained its original architecture since its opening. The Petit Théâtre de Sherbrooke, located downtown, presents musicals and plays for children.

Since 2007, the Centre des arts de la scène Jean-Besré (CASJB), built by the city with the support of the Ministry of Culture and Communications, has assisted in the creation and production of material for the region's artistic community. Currently it serves as the location for training theatre, music, and dance professionals. It contains three rehearsal studios, a production room, a decoration workshop, and a costume workshop, as well as administrative offices for each of its resident companies. 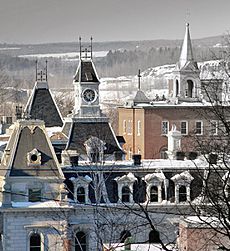 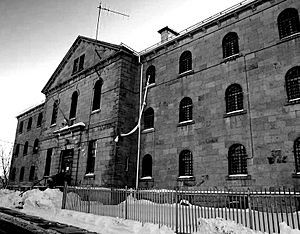 Sherbrooke has parks and greenspaces that encompass a variety of recreational activities. In total, there are 108 in the municipality. Parks Jacques-Cartier, Mont Bellevue, Bois Beckett, Lucien-Blanchard, Central, Quintal, Victoria, and Marais Réal-D.-Carbonneau are among the most popular destinations.

Situated along lac des Nations, this park is about 1 kilometre (0.62 mi) away from the downtown area and is connected to the lac des Nations promenade. It contains several sports facilities including soccer fields and tennis courts. Several festivals are held here including the Fête du Lac des Nations, the Carnaval de Sherbooke, the festivities for the Fête Nationale and Canada Day.

This park is the largest in Sherbrooke, with an area of 200 hectares (490 acres). Situated partially on the campus of l'Université de Sherbrooke, it is managed by the city and developed by volunteer organization Regroupement du Mont-Bellevue. Within the park are mounts Bellevue and John-S.-Bourque, the former of which has a small ski station. The park is also used for cross-country skiing, snowshoeing, walking, and tubing in winter; as well as hiking, mountain biking, archery, tennis, and jogging in summer. The park contains a total of 30 kilometres (19 mi) of trails and several different types of ecosystems.

This park was established on an old maple grove that belonged to Major Henry Beckett between 1834 and 1870. The property remained in his family until it was acquired by the city in 1963. In 2000, the Ministère de Ressources naturelles et de la Faune recognized the property as an old-growth forest. The oldest tree is said to be 270 years old. The park is maintained, protected and promoted by a volunteer group. Several trails have been built by the city which are open year-round. Within the park, there are several artifacts left behind by Beckett, such as foundations, wells, and farm equipment.

Situated 3 kilometres (1.9 mi) west of downtown on the bank of the Magog River, this park is open to several outdoor activities such as swimming and beach volleyball. Bicycles, canoes, kayaks, paddle boats, and dragon boats are available for rent. There is an interpretation centre with an emphasis on the reptiles and amphibians of the region as well as a boutique.

At the heart of the Rock Forest–Saint-Élie–Deauville borough, this park is equipped for soccer, tennis, baseball, beach volleyball, and has a playground and an outdoor pool.

Formerly called Parc Central de Fleurimont, this park is situated in the borough of Fleurimont, and mirrors Central Park of Rock Forest-Saint-Élie-Deauville. In early July, the Pif Classic baseball tournament is held in the park, and in August, it hosts the Festival des Traditions du Monde.

Across Terrill Street from one another, these parks are situated just east of downtown. Inside these parks lie pedestrian trails, Olympic-size soccer fields, a handicap accessible outdoor pool, and a sports complex. This multifunctional facility, called the Centre MultiSport Roland-Dussault, has an artificial turf allowing local teams the opportunity to practise indoor soccer, baseball, football, rugby, and so on. There is a hockey arena.

Located near the Saint-François River, this marsh was developed by CHARMES, a non-profit management corporation that seeks to promote ecotourism in and around Sherbrooke. The park is located on 40 hectares (99 acres) of land and allows visitors access to wooden piers and observation towers, where there are over 50 tree and shrub species and birds.

All content from Kiddle encyclopedia articles (including the article images and facts) can be freely used under Attribution-ShareAlike license, unless stated otherwise. Cite this article:
Sherbrooke Facts for Kids. Kiddle Encyclopedia.