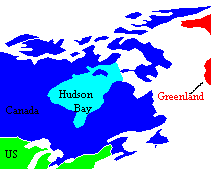 The Hudson Bay is a bay that goes into East-central Canada. It is the fourth largest sea in the world with an area of 316,000 square miles (819,000 square kilometres). The northern and western shores belong to Nunavut, the southern shore is split between Manitoba and Ontario, and the eastern shore belongs to Quebec. It is connected with the Atlantic Ocean through the Hudson Strait, which is in the northeast of the bay, and with the Arctic Ocean through the Foxe Channel in the north part of the bay.

It was named for the English explorer Henry Hudson, who, in 1610 on the ship Discovery, found the bay and clamed it for England.

All content from Kiddle encyclopedia articles (including the article images and facts) can be freely used under Attribution-ShareAlike license, unless stated otherwise. Cite this article:
Hudson Bay Facts for Kids. Kiddle Encyclopedia.