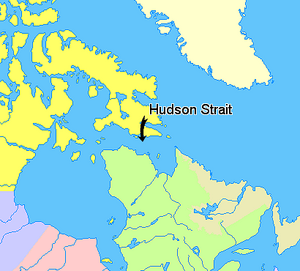 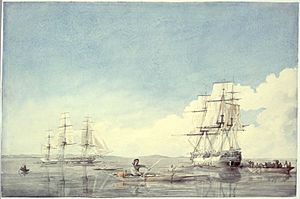 The Hudson's Bay Company ships Prince of Wales and Eddystone bartering with the Inuit off the Upper Savage Islands, Hudson Strait; by Robert Hood (1819)

Hudson Strait links the Atlantic Ocean to Hudson Bay in Canada. It is between Baffin Island and the northern coast of Quebec. Its eastern entrance is Cape Chidley and Resolution Island. It is 450 mi (720 km) long. Its width varies from 150 mi (240 km) at its largest point, to a minimum of 40 mi (64 km).

The strait was discovered by explorer Henry Hudson in the year 1609. It was long thought to be the fabled Northwest Passage.

All content from Kiddle encyclopedia articles (including the article images and facts) can be freely used under Attribution-ShareAlike license, unless stated otherwise. Cite this article:
Hudson Strait Facts for Kids. Kiddle Encyclopedia.