Cape Chidley is a headland located on the eastern shore of Killiniq Island, Canada at the northeastern tip of the Labrador Peninsula.

Cape Chidley was named by English explorer John Davis on August 1, 1587 after his friend and fellow explorer John Chidley. On October 22, 1943, the German submarine U-537 landed just south of Cape Chidley and set up Weather Station Kurt to collect data about the weather.

Originally, Cape Chidley was meant to be the site for a long-range radar station called "N-30." It was to fall within plans for the Pinetree Line, a series of radar stations across the 50th parallel. Supplies were moved to the site by ship during 1951-52, but in late 1952-early 1953 the site was moved to Resolution Island. 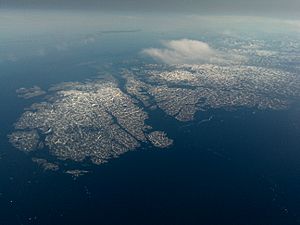 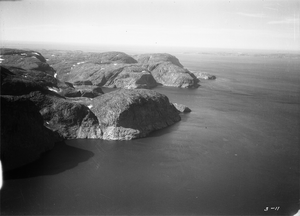 Cape Chidley is located on the interprovincial boundary between the province of Newfoundland and Labrador and the territory of Nunavut. It forms the northernmost point of Labrador.

Sometimes spelled Cape Chudleigh, Cape Chidley is sometimes misrepresented[where?] as being located on the interprovincial border between Quebec and Newfoundland and Labrador. The Dominion of Newfoundland, having been a separate country at the time that Canada's Arctic islands were assigned in this manner, shared a boundary on Killiniq Island as the territory of Labrador included the entire Atlantic watershed of the Labrador Peninsula and its islands. 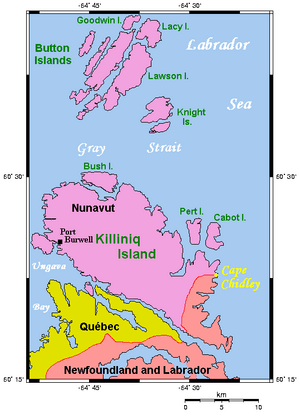 The closest community to Cape Chidley was Port Burwell, Nunavut, until it was evacuated in 1978. Killiniq Island itself is separated from mainland North America by the narrow McLelan Strait.

The Torngat Mountains run along the coast of Labrador and terminate at Killiniq Island. The top of the knoll forming the headland at Cape Chidley has an elevation of 350 m (1,150 ft) making the cape considerably higher than either of its two flanking headlands.

The Cape Chidley Islands lie at the north end of the cape.

All content from Kiddle encyclopedia articles (including the article images and facts) can be freely used under Attribution-ShareAlike license, unless stated otherwise. Cite this article:
Cape Chidley Facts for Kids. Kiddle Encyclopedia.