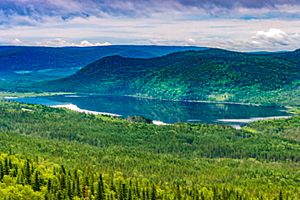 A landscape in Newfoundland and Labrador.

The Labrador Peninsula is a large peninsula in eastern Canada. It is bounded by the Hudson Bay to the west, the Hudson Strait to the north, the Labrador Sea to the east, and the Gulf of Saint Lawrence to the southeast. The peninsula includes the region of Labrador, which is part of the province of Newfoundland and Labrador, and the regions of Saguenay–Lac-Saint-Jean, Côte-Nord, and Nord-du-Québec, which are in the province of Quebec. It has an area of 1,400,000 km2 (541,000 sq mi).

The peninsula is very sparsely populated, especially in the north.

All content from Kiddle encyclopedia articles (including the article images and facts) can be freely used under Attribution-ShareAlike license, unless stated otherwise. Cite this article:
Labrador Peninsula Facts for Kids. Kiddle Encyclopedia.