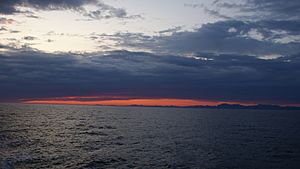 Past sunset at Labrador Sea, off the coast of Paamiut, Greenland

The Labrador Sea (French: mer du Labrador) is an arm of the North Atlantic Ocean between the Labrador Peninsula and Greenland. The sea is surrounded by continental shelves to the southwest, northwest, and northeast. It connects to the north with Baffin Bay through the Davis Strait. It has been described as a marginal sea of the Atlantic.

The northern and western parts of the Labrador Sea are covered in ice between December and June. The drift ice serves as a breeding ground for seals in early spring. The sea is also a feeding ground for Atlantic salmon and several marine mammal species. Shrimp fisheries began in 1978, as well as cod fishing. The cod fishing quickly lessened the fish population in the 1990s and was stopped in 1992. Other fishery targets include haddock, Atlantic herring, lobster and several species of flatfish and pelagic fish such as sand lance and capelin. Bigger amounts are in the southern parts of the sea.

The sea has one of the two major stocks of Sei whales, the other one being the Scotian Shelf. Also common are minke and bottlenose whales.

All content from Kiddle encyclopedia articles (including the article images and facts) can be freely used under Attribution-ShareAlike license, unless stated otherwise. Cite this article:
Labrador Sea Facts for Kids. Kiddle Encyclopedia.