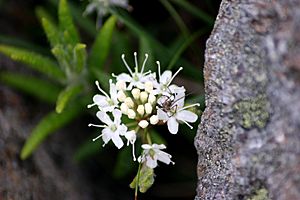 Close up of a Labrador Tea flower, found in the alpine zone of northern New Hampshire. 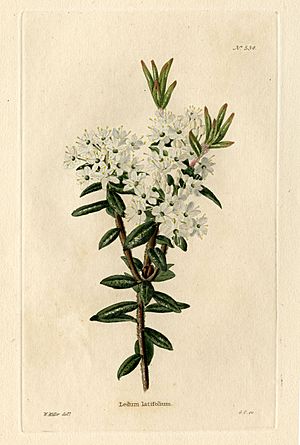 Labrador tea is a common name for three closely related plant species in the genus Rhododendron as well as an herbal tea made from their leaves.

All three species are primarily wetland plants in the heath family. The herbal tea has been a favorite beverage among Athabaskan First Nations, and Inuit people.

The leaves are smooth on top with often wrinkled edges, and fuzzy white to red-brown underneath.

R. tomentosum, R. groenlandicum, and R. neoglandulosum can be found in wetlands and peat bogs.

The Athabaskans and other indigenous peoples brew the leaves as a beverage. The Pomo, Kashaya, Tolowa and Yurok of Northern California boil the leaves of Western Labrador Tea similarly, to make a medicinal herbal tea, to help with coughs and colds. Botanical extracts from the leaves have been used to create natural skin care products by companies in Quebec and Newfoundland and Labrador. Others use Labrador tea to spice meat by boiling the leaves and branches in water and then soaking the meat in the decoction.

During the eighteenth century, German brewers used R. tomentosum while brewing beer to make it more intoxicating, but it became forbidden because it led to increased aggression.

There is no sufficient data that demonstrates Labrador tea is safe to consume as toxicity varies across species and localities. Excessive consumption is not recommended due to diuresis, vomiting, dizziness, and drowsiness. Large doses can lead to cramps, convulsions, paralysis, and, in rare cases, death.

All content from Kiddle encyclopedia articles (including the article images and facts) can be freely used under Attribution-ShareAlike license, unless stated otherwise. Cite this article:
Labrador tea Facts for Kids. Kiddle Encyclopedia.