The Atlantic Herring is a kind of herring, a fish. It can be found on both sides of the Atlantic. It can grow up to 45cm in length, weighing more than half a kilogram. It is a swarm fish, meaning many fish come together and form a school (or swarm) of fish. Swarms of up to 4 cubic kilometers in size have been measured of atlantic herring, with an eastimated 4 billion individual fish. Like with so many other fishes though, commercial overfishing is posing a problem. Stocks of herring have been collapsing.

Their natural predators are seals, cod, other large fish as well as some kinds of whales. The current reason for the overfishing is the need of the Omega Fatty Acid, which helps increase memory, and brain functions. 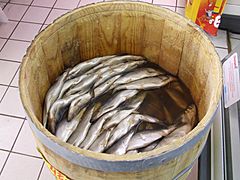 Atlantic herring have a fusiform body. Gill rakers in their mouths filter incoming water, trapping any zooplankton and phytoplankton.

Atlantic herring are in general fragile. They have large and delicate gill surfaces, and contact with foreign matter can strip away their large scales.

They have retreated from many estuaries worldwide due to excess water pollution although in some estuaries that have been cleaned up, herring have returned. The presence of their larvae indicates cleaner and more–oxygenated waters.

Atlantic herring can be found on both sides of the ocean. They range across North Atlantic waters such as the Gulf of Maine, the Gulf of St Lawrence, the Bay of Fundy, the Labrador Sea, the Davis Straits, the Beaufort Sea, the Denmark Straits, the Norwegian Sea, the North Sea, the English Channel, the Celtic Sea, the Irish Sea, the Bay of Biscay and Sea of the Hebrides. Although Atlantic herring are found in the northern waters surrounding the Arctic, they are not considered to be an Arctic species. 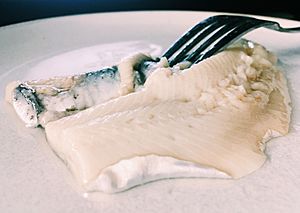 The small-sized herring in the inner parts of the Baltic Sea, which is also less fatty than the true Atlantic herring. The Swedish dish surströmming is made from Baltic herring.

Herrings reach sexual maturity when they are 3 to 4 years old. The life expectancy once mature is 12 to 16 years. Atlantic herrings spawn during summer in estuaries, coastal waters or in offshore banks. Fertilization is external like with most other fish, the female releases between 20,000 and 40,000 eggs and the males simultaneously release masses of milt so that they mix freely in the sea. Once fertilised the 1 to 1.4 mm diameter egg sinks to the sea bed where its sticky surface adheres to gravel or weed. It will only mature if its temperature stays below 66 F (18,9 C). The hatched larvae are 3 to 4 mm long and transparent except for the eyes which have some pigmentation.

Herring-like fish are the most important fish group on the planet. They are also the most populous fish. They are the dominant converter of zooplankton into fish, consuming copepods, arrow worms chaetognatha, pelagic amphipods hyperiidae, mysids and krill in the pelagic zone. Conversely, they are a central prey item or forage fish for higher trophic levels. The reasons for this success is still enigmatic; one speculation attributes their dominance to the huge, extremely fast cruising schools they inhabit.

School of juvenile herring ram feeding close to the surface

Atlantic herring can school in huge numbers. Radakov estimated herring schools in the North Atlantic can occupy up to 4.8 cubic kilometres with fish densities between 0.5 and 1.0 fish/cubic metre. That's several billion fish in one school.

Herring are amongst the most spectacular schoolers ("obligate schoolers" under older terminology). They aggregate in groups that consist of thousands to hundreds of thousands or even millions of individuals. The schools traverse the open oceans.

Schools have a very precise spatial arrangement that allows the school to maintain a relatively constant cruising speed. Schools from an individual stock generally travel in a triangular pattern between their spawning grounds, e.g. Southern Norway, their feeding grounds (Iceland) and their nursery grounds (Northern Norway). Such wide triangular journeys are probably important because feeding herrings cannot distinguish their own offspring. They have excellent hearing, and a school can react very quickly to evade predators. Herring schools keep a certain distance from a moving scuba diver or a cruising predator like a killer whale, forming a vacuole which looks like a doughnut from a spotter plane. The phenomenon of schooling is far from understood, especially the implications on swimming and feeding-energetics. Many hypotheses have been put forward to explain the function of schooling, such as predator confusion, reduced risk of being found, better orientation, and synchronized hunting. However, schooling has disadvantages such as: oxygen- and food-depletion and excretion buildup in the breathing media. The school-array probably gives advantages in energy saving although this is a highly controversial and much debated field.

Schools of herring can on calm days sometimes be detected at the surface from more than a mile away by the little waves they form, or from a few meters at night when they trigger bioluminescence in surrounding plankton ("firing"). All underwater recordings show herring constantly cruising reaching speeds up to 108 centimetres (43 in) per second, and much higher escape speeds.

All content from Kiddle encyclopedia articles (including the article images and facts) can be freely used under Attribution-ShareAlike license, unless stated otherwise. Cite this article:
Atlantic Herring Facts for Kids. Kiddle Encyclopedia.