Sea of the Hebrides facts for kids 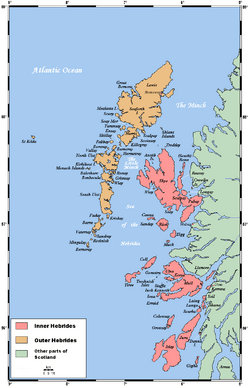 The Inner and Outer Hebrides.

The Sea of the Hebrides (Scottish Gaelic: An Cuan Barrach) is a small, part-sheltered part of the North Atlantic Ocean, indirectly off the southern part of the north-west coast of Scotland. To the east are the mainland of Scotland and the northern Inner Hebrides (including Skye and the Small Isles); to the west are the southern Outer Hebrides islands, principally South Uist, Eriskay, and Barra. To the north is the Little Minch, a channel connecting it with the Minch.

The Sea of the Hebrides forms part of the Inner Seas off the West Coast of Scotland, as defined by the International Hydrographic Organization, and part of the Seas west of Scotland as far as fisheries management is concerned.

Ending on 30 August 2019, the Scottish Government consulted on a proposal to designate the Sea of the Hebrides a Marine Protected Area (MPA). The designation was confirmed in December 2020. The designated area of the MPA covers 1,003,900 hectares (10,039 km2), mainly to protect the area's population of basking sharks and minke whales.

All content from Kiddle encyclopedia articles (including the article images and facts) can be freely used under Attribution-ShareAlike license, unless stated otherwise. Cite this article:
Sea of the Hebrides Facts for Kids. Kiddle Encyclopedia.