Kids Encyclopedia Facts
This page is about the island in Scotland. For other uses, see Barra (disambiguation).

Barra ( Scottish Gaelic: Barraigh or Eilean Bharraigh Scots: Barra) is an island in the Outer Hebrides, Scotland, and the second southernmost inhabited island there, after the adjacent island of Vatersay to which it is connected by a short causeway. The island is named after Saint Finbarr of Cork. 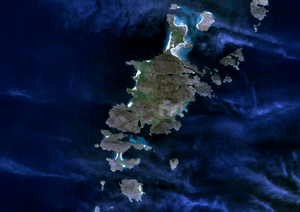 The area of Barra is roughly 60 square kilometres (23 sq mi). The main village is Castlebay (Bàgh a' Chaisteil).

The west of the island has white sandy beaches backed by shell-sand, machair and the east has numerous rocky inlets.

Kisimul Castle at Castlebay is located on a rock in the bay, giving the village its name. A smaller medieval tower house, Dun Mhic Leoid, can be found in the middle of Loch St Clare on the west side of the island at Tangasdale.

Other places of interest on the island include a ruined church and museum at Cille Bharra, a number of Iron Age brochs such as those at Dùn Chuidhir and An Dùn Bàn, and a range of other Iron Age and later structures which have recently been excavated and recorded.

Barra has an oceanic climate, with mild temperatures year round.

The island's place name is derived from two elements: Barr and Old Norse ey ("island"). It is possible that Barr represents the Gaelic personal name Finnbarr. Other possibilities are that it instead represents the Old Norse elements berr or barr ("bare" or "rough"), or perhaps the Celtic element *barr ("top" or "peak").

In 1427, Alexander, Lord of the Isles granted the island to Giolla Adhamhnáin Mac Néill, a member of Clan MacNeil. The clan held the island until 1838, when Roderick MacNeil, sold the island to Colonel Gordon of Cluny. Gordon expelled most of the inhabitants in order to make way for sheep farming. The displaced islanders variously went to the Scottish mainland, Australia, New Zealand, the United States and Canada. Barra was restored to MacNeil ownership in 1937 when the Barra estate, which encompassed most of the island, was bought by Robert Lister Macneil.

In 2003, the ownership of the Barra Estate was passed by the owner, Ian Roderick Macneil, to the Scottish Government. The estate can be transferred to the inhabitants in the future, at their request. Macneil had previously transferred Kisimul Castle to Historic Scotland in 2000.

In May 2007 Channel 4's Time Team came to the hamlet of Allasdale to investigate the exposed remains of Bronze Age burials and Iron Age roundhouses in sand dunes that had been previously uncovered by storms. The programme was broadcast on 20 January 2008.

The Dualchas Heritage and Cultural Centre is located in Castlebay, next to Castlebay Community School. It has various exhibitions annually, and is open throughout the year. 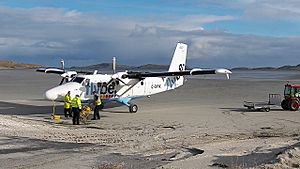 Barra's airport, near Northbay, uses the 2-mile-long (3 km) cockle shell beach of Traigh Mhor, (Scottish Gaelic: An Tràigh Mhòr "The Great Beach") as a runway. Planes can land and take off only at low tide, so the timetable varies. Voted the world's most scenic landing location using a scheduled flight, Barra's airport is claimed to be the only airport in the world to have regular scheduled flights landing on a beach. As of 2019 Loganair advertises flights to Barra in the de Havilland Canada DHC-6 Twin Otter, aircraft travelling to and from Glasgow. There are usually flights every day of the week in the summer.

A large Ro-Ro Ferry runs between the island and Oban from the ferry terminal at Castlebay, and takes about 5 hours. A smaller vehicle ferry links the island to South Uist and travels between Ardmore (An Àird Mhòr) at the north of the island and Ceann a' Gharaidh in Eriskay (Èirisgeigh). This crossing takes around 40 minutes. Both are run by Caledonian MacBrayne. 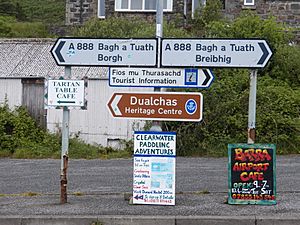 There are local buses, which use the circular A888 and the road to the northern ferry terminal to Eriskay and the airport, and usually coincide with flight times and ferry times.

The fish factory, Barratlantic, in Northbay is a major contributor to the island's economy and the Hebridean Toffee Factory in Castlebay is one of the few manufacturers on Barra.

Tourism provides the main income for the majority of islanders; the high season lasts from May to September. Thousands of people visit the island every year, the busiest times being during Fèis Bharraigh & BarraFest in July. In 2010 camping on the machair at the airport was banned due to erosion; this prompted crofters to provide areas on their crofts for visiting tourists. Boat trips to the neighbouring island of Mingulay are available during the summer season, and island-hopping plane trips are also available.

A distillery is planned to be built in Borve, on the west side of the island. The Isle of Barra Distillery (trading as Uisge Beatha nan Eilean Ltd) has now installed four Proven 6 kW wind turbines next to the reservoir Loch Uisge, which originally supplied the drinking water to Castlebay. It is proposed that as much as possible of the necessary resources to produce the whisky should come from Barra or the surrounding islands, with only the bare minimum necessary being imported from outside the island's economy.

Coimhearsachd Bharraidh agus Bhatarsaidh (Barra and Vatersay Community) Ltd is a community-owned company whose aim is to support community development on Barra and Vatersay. The company is managed by a volunteer board of directors drawn from the membership. Membership ofin the Company is open to residents of the two islands whose names appear on the voting register.

The company's latest project is a 900 kW Enercon E-44 wind turbine being installed at Gòb Sgùrabhal, on the most north westerly point of the Isle of Barra, and early indications are that the wind resource will make this one of the most productive 900 kW turbines in Western Europe.

Tourism provides the main income for the majority of islanders; the high season lasts from May to September. Thousands of people visit the island every year, the busiest times being during Fèis Bharraigh & BarraFest in July. The Dualchas Heritage and Cultural Centre is located in Castlebay, next to Castlebay Community School. It has various exhibitions each year and is open throughout the year. In April 2020, Condé Nast Traveller summed up Barra as "a delightful little island with its own castle and beach airport" and recommended visiting the "high cliffs in the east and lovely beaches and bays in the west".

According to the Scottish Government, "tourism is by far and away the mainstay industry" of the Outer Hebrides, "generating £65m in economic value for the islands, sustaining around 1000 jobs" The report adds that the "islands receive 219,000 visitors per year". The Outer Hebrides tourism bureau states that 10-15% of economic activity on the islands was made up of tourism in 2017. The agency states that the "exact split between islands is not possible" when calculating the number of visits, but "the approximate split is Lewis (45%), Uist (25%), Harris (20%), Barra (10%)".

Castlebay is the primary base for tourists, with a few hotels, a supermarket, bank and petrol station. Explore Scotland stated in 2020 that the island was "also an ideal starting point for visiting and exploring the Uists and Benbecula".

In 2010, camping on the machair at the airport was banned due to erosion; this prompted crofters to provide areas on their crofts for visiting tourists. Boat trips to the neighbouring island of Mingulay are available during the summer season, and island-hopping plane trips are also available.

The Barratlantic factory, in Northbay is a fish and shellfish processing company. As of 2020, its main products were king scallops and langoustines but it was selling most types of white fish from the quayside. Their Web site indicated that the stock included "cod; haddock; skate; witches; megrims; turbot; Dover sole and monkfish which you can buy direct from the factory". The Hebridean Toffee Factory in Castlebay is one of the few manufacturers on Barra and it makes the products locally. According to Visit Scotland, the toffee can be ordered from anywhere in the world; "it is made to order and is usually shipped within 24 hours".

Isle of Barra Distillers was founded by Michael and Katie Morrison in 2016; their Barra Atlantic Gin was first sold in August 2017 and the company has expanded since then. As of early 2021, the distillery continued marketing gin, with great success. The plan for whisky was stated on its Web site as: "It is our goal to open the Islands first Single Malt Whisky Distillery within the next 2-3 years".

Barra hosts an annual half-marathon called the Barrathon, which is part of the Western Isles Half Marathon series. This is accompanied by a shorter fun-run for families and younger children. A number of fund-raising events are held around this, including ceilidhs and dances.

There is also an annual hill race, in which participants run up Heaval (383 m) before returning to Castlebay Square. The fastest recorded time, set in 1987, is 26.25 minutes.

The Barra community holds an annual games on the island. The island golf club, Comunn Goilf Bharraidh, has a 9-hole course that is claimed to be the furthest west in the United Kingdom. However, this title may be held by one of the courses near Enniskillen in Northern Ireland.

All content from Kiddle encyclopedia articles (including the article images and facts) can be freely used under Attribution-ShareAlike license, unless stated otherwise. Cite this article:
Barra Facts for Kids. Kiddle Encyclopedia.