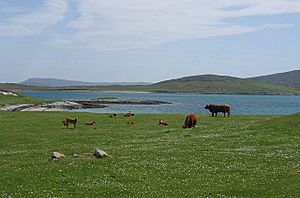 The machair on Berneray, Outer Hebrides 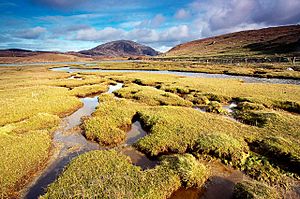 Machair ( sometimes machar in English) refers to a fertile low-lying grassy plain found on part of the northwest coastlines of Ireland and Scotland, in particular the Outer Hebrides. The best examples are to be found on North and South Uist, Harris and Lewis.

Machair is a Gaelic word meaning "fertile plain", but the word is now also used in scientific literature to describe the dune grassland unique to Western Scotland and north-west Ireland. It had been used by naturalists since 1926, but the term was not adopted by scientists until the 1940s. The word is used in a number of placenames in Ireland and Scotland, even in areas where no machair has ever been supported. In Scotland, some Gaelic speakers use "machair" as a general term for the whole dune system, including the dune ridge, while others restrict its use to the extensive flat grasslands inland of the dune ridge. In Ireland, the word has been used only in place-names, and the habitat’s existence there was only recently confirmed.

In 1976, an effort was made to strictly define machair, although a number of systems still evade classification. This proved a difficulty when the habitat was listed on Annex I of the Habitats Directive in 1992, leading to the distinction between "machair grassland" and the "machair system." 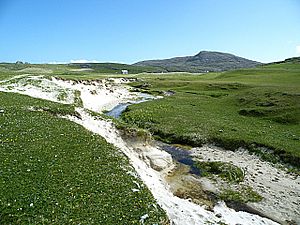 A stream cutting through the machair highlights a sandy composition

Machair is distinguished from the links on the east coast of Scotland by a lower mineral content, whereas the links are high in silica. Machair plains are highly calcareous, with calcium carbonate concentrations of between 20% to 80% on the beaches, and decreasing further away from the shore. The pH of a machair is typically greater than 7, i.e. it is alkaline.

The inner side of a machair is often wet or marshy, and may contain lochs.

The modern theory of machair formation was first set out by William MacGillivray in 1830. He worked out that shell fragments are rolled by waves towards the shore, where they are broken up further. The small shell fragments are blown up the beach to form hillocks, which are then blown inland.

Human activity has an important role in the creation of the machair. Archaeological evidence indicates that some trees had been cleared for agriculture by around 6000 BC, but there was still some woodland on the coast of South Uist as late as 1549. Seaweed deposited by early farmers provided a protective cover and added nutrients to the soil. The grass is kept short by cattle and sheep, which also add trample and add texture to the sward, forming tussocks that favour a number of bird species.

The soil is low in a number of key nutrients, including trace elements such as copper, cobalt and manganese, which makes it necessary to feed cattle supplements or take them to summer pastures elsewhere. The sandy soil does not hold nutrients well, making artificial fertilisers ineffective and limiting the crops that can be grown to certain strains of oats and rye, and bere barley.

Machairs have received considerable ecological and conservational attention, chiefly because of their unique ecosystems.

Kelp in the sea next to the machair softens the impact of waves, reducing erosion, and when it is washed ashore by storms, forms a protective barrier on the beach. As it rots, the sand flies it abounds in provide rich feeding for flocks of starlings and other passerines, wintering waders, gulls and others. If covered with sand, it will compost to form a fertile bed where annual coastal flowers and marram grass will thrive. 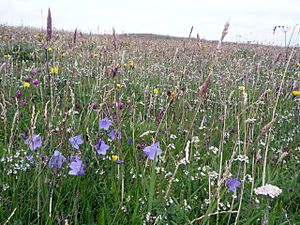 Wildflowers on a machair 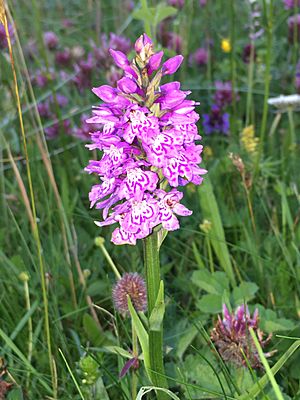 They can house rare carpet flowers, including orchids such as Irish lady's tresses and the Hebridean Spotted Orchid (Dactylorhiza fuchii ssp hebridensis) and other plants such as the yellow rattle.

Arable and fallow machair is threatened by changes to the way the land is managed, where the original system of crofts is under threat from a reduction in the number of crofters and the use of "modern" techniques. Changes to the Common Agricultural Policy, where production was decoupled from subsidies, reduced the amount of grazing taking place in many crofting areas, and led some areas to be undergrazed or abandoned. A lack of native seed increases the need for fertilizers and herbicides.

Rising sea levels caused by global warming also pose a threat to low-lying coastal areas, leading to increased erosion. In January 1993, the storm which ran MV Braer aground off Shetland eroded 3 metres (9.8 ft) of machair along the entire length of Uist and Barra. On 11/12 January 2005, a storm blowing consistently in excess of hurricane force 12 destroyed hectares of machair and killed a family of five.

All content from Kiddle encyclopedia articles (including the article images and facts) can be freely used under Attribution-ShareAlike license, unless stated otherwise. Cite this article:
Machair Facts for Kids. Kiddle Encyclopedia.