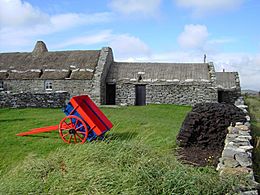 The Shetland Crofthouse Museum, with peat stacked outside

A croft is a fenced or enclosed area of land, usually small and arable, and usually, but not always, with a crofter's dwelling thereon. A crofter is one who has tenure and use of the land, typically as a tenant farmer, especially in rural areas.

The word croft is West Germanic in etymology, and is now most familiar in Scotland, most crofts being in the Highlands and Islands area. Elsewhere the expression is generally archaic. In Scottish Gaelic, it is rendered croit ( plural croitean)

Essentially similar positions have been the medieval villein''.

All content from Kiddle encyclopedia articles (including the article images and facts) can be freely used under Attribution-ShareAlike license, unless stated otherwise. Cite this article:
Croft (land) Facts for Kids. Kiddle Encyclopedia.