Kids Encyclopedia Facts
This page is about the Scottish region. For other uses, see Argyll (disambiguation). 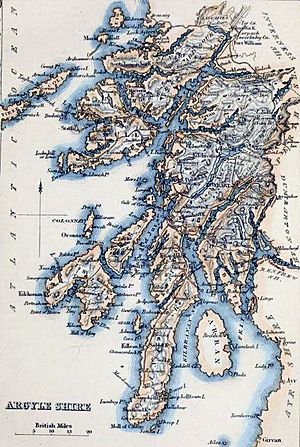 Argyll, archaically Argyle (Earra-Ghàidheal in modern Gaelic), is an ancient shire of western Scotland. Its area corresponds with most of the modern council area of Argyll and Bute, excluding the island of Bute and the Helensburgh area, but including the Morvern and Ardnamurchan areas of the Highland council area. At present, Argyll (sometimes anglicised as Argyllshire) is one of the registration counties of Scotland.

Argyll is of ancient origin, and corresponds to most of the ancient kingdom of Dál Riata. Argyll was also a medieval bishopric with its cathedral at Lismore, as well as an early modern earldom and dukedom, the Dukedom of Argyll.

There was an Argyllshire constituency of the Parliament of Great Britain from 1708 until 1983.

The name derives from Old Gaelic airer Goídel (border region of the Gaels). The early thirteenth-century author of De Situ Albanie explains that "the name Arregathel means margin (i.e., border region) of the Scots or Irish, because all Scots and Irish are generally called Gattheli (i.e. Gaels), from their ancient warleader known as Gaithelglas."

However, the word airer naturally carries the meaning of the word 'coast' when applied to maritime regions, so the placename can also be translated as "Coast of [the] Gaels". Woolf has suggested that the name Airer Goídel replaced the name Dál Riata when the 9th-century Norse conquest split Irish Dál Riata and the islands of Alban Dál Riata off from mainland Alban Dál Riata. The mainland area, renamed Airer Goídel, would have contrasted with the offshore islands of Innse Gall, literally "islands of the foreigners." They were referred to this way because during the 9th to 12th centuries, they were ruled by Old Norse-speaking Norse–Gaels.

The first record of Argyll as a shire dates from 1326, when a sheriff was appointed. At that time the shire covered a much larger area than the later county. It included the islands which later formed Buteshire, which became a separate shire by 1388, when a heritable sheriff was appointed. It also included the area of Ross-shire, which was separated from Argyll by an act of 1503.

The heritable sheriffdom of Argyll was abolished by the Heritable Jurisdictions (Scotland) Act 1746, and the governance of Scottish shires was brought into line with that of counties in the rest of Great Britain.

Between 1890 and 1975, Argyll had a county council. Argyll's neighbouring counties were Inverness-shire, Perthshire, Dunbartonshire, Renfrewshire, Ayrshire and Bute. Renfrewshire and Ayrshire are on the other side of the Firth of Clyde. Bute is a county of islands in the firth. The county town of Argyll was historically Inveraray, which is still the seat of the Duke of Argyll. Lochgilphead later claimed to be the county town, as the seat of local government for the county from the 19th century. Neither town was the largest settlement geographically, nor in terms of population, however. Argyll's largest towns were (and are) Oban, Dunoon and Campbeltown.

The Small Isles of Muck or Muick, Rhum or Rùm, Canna and Sanday were part of the county until they were transferred to Inverness-shire in 1891 by the boundary commission appointed under the Local Government (Scotland) Act 1889. The island of Egg or Eigg was already in Inverness-shire.

The use of the County of Argyll for local government purposes ceased in 1975 with its area being split between Highland and Strathclyde Regions. A local government district called Argyll and Bute was formed in the Strathclyde region, including most of Argyll and the Isle of Bute. The Ardnamurchan, Ardgour, Ballachulish, Duror, Glencoe, Kinlochleven and Morvern areas of Argyll were detached to become parts of Lochaber District, in Highland. They remained in Highland following the 1996 revision. 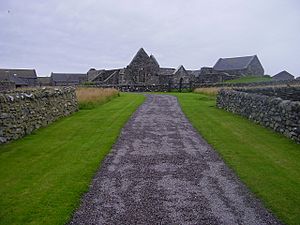 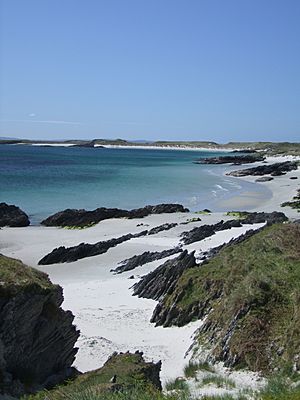 In 1996 a new unitary council area of Argyll and Bute was created, with a change in boundaries to include part of the former Strathclyde district of Dumbarton.

Civil parishes are still used for some statistical purposes, and separate census figures are published for them. As their areas have been largely unchanged since the 19th century, this allows for comparison of population figures over an extended period of time.

Most common surnames in Argyll at the time of the United Kingdom Census of 1881, by order of incidence:

All content from Kiddle encyclopedia articles (including the article images and facts) can be freely used under Attribution-ShareAlike license, unless stated otherwise. Cite this article:
Argyll Facts for Kids. Kiddle Encyclopedia.