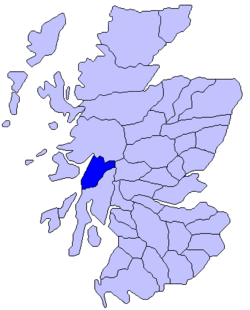 Map of Scotland showing the historic province of Lorne

Lorne (or Lorn; Scottish Gaelic: Latharna) is an ancient province (medieval Latin: provincia) in the west of Scotland, which is now a district in the Argyll and Bute council area. The district gives its name to the Lynn of Lorn National Scenic Area, one of forty such areas in Scotland, which have been defined so as to identify areas of exceptional scenery and to ensure its protection from inappropriate development. The national scenic areas cover 15,726 ha, of which 10,088 ha are marine seascape, and includes the whole of the island of Lismore, along with neighbouring areas on the mainland such as Benderloch and Port Appin, and the Shuna Island.

The region may have given its name to the traditional Scottish breakfast dish Lorne sausage.

Lorne bordered (what was then a smaller) Argyll to the south, Lochaber to the north and Breadalbane to the east.

The Firth of Lorn separates Mull from islands off the Lorne coastline.

Oban is the capital of the ancient district of Lorne. Once labelled the "Charing Cross of the Highlands" because of the range of steamer connections with the islands and Argyll coast, Oban is still a busy port for ferries, cruise liners, fishing boats and pleasure craft.

The district may have taken its name from Loarn mac Eirc, a brother of Fergus Mór Mac Earca who, around the year 500 AD became ruler of the Scottish Kingdom of Dál Riata. Loarn created his own dynasty in the new kingdom, in the district of Argyll to which he gave his name.

From 1470, the Lordship of Lorne was held as a subsidiary title of the earldom and later the dukedom of Argyll. The coat of arms of the Lordship features a black lymphad (galley) on a silver field, which the Duke quarters with the family arms of Campbell.

At some point in the Middle Ages the district was combined with Argyll and parts of Lochaber to form the shire or sheriffdom of Argyll. The Medieval shire boundaries remained more or less unchanged until the passing of the Local Government (Scotland) Act 1973 which abolished shires as a unit of local government, to be replaced by regions and districts, and later "council areas". Lorne is now part of the council area of Argyll and Bute, which was formed out of the pre-1974 shires of Bute and Argyll.

All content from Kiddle encyclopedia articles (including the article images and facts) can be freely used under Attribution-ShareAlike license, unless stated otherwise. Cite this article:
Lorne, Scotland Facts for Kids. Kiddle Encyclopedia.