Oban ( OH-bən; An t-Òban in Scottish Gaelic meaning The Little Bay) is a resort town within the Argyll and Bute council area of Scotland. Despite its small size, it is the largest town between Helensburgh and Fort William. During the tourist season, the town can play host to up to 25,000 people. Oban occupies a setting in the Firth of Lorn. The bay is a near perfect horseshoe, protected by the island of Kerrera; and beyond Kerrera, the Isle of Mull. To the north, is the long low island of Lismore, and the mountains of Morvern and Ardgour.

The site where Oban now stands has been used by humans since at least mesolithic times, as evidenced by archaeological remains of cave dwellers found in the town. Just outside the town stands Dunollie Castle, on a site that overlooks the main entrance to the bay and has been fortified since the Bronze age. Prior to the 19th century, the town itself supported very few households, sustaining only minor fishing, trading, shipbuilding and quarrying industries, and a few hardy tourists. The Renfrew trading company established a storehouse there in about 1714 as a local outlet for its merchandise, but no Custom-house was deemed necessary until around 1760.

The modern town of Oban grew up around the distillery, which was founded there in 1794. The town was raised to a burgh of barony in 1811 by royal charter. Sir Walter Scott visited the area in 1814, the year in which he published his poem The Lord of the Isles; interest in the poem brought many new visitors to the town. The arrival of the railways in the 1880s brought further prosperity, revitalising local industry and giving new energy to tourism. Shortly thereafter, McCaig's Tower, a folly and prominent local landmark, was constructed, as was the ill-fated Oban Hydro. 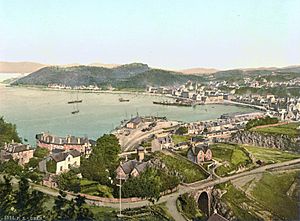 During World War II, Oban was used by Merchant and Royal Navy ships and was an important base in the Battle of the Atlantic. The Royal Navy had a signal station near Ganavan, and an anti-submarine indicator loop station, which detected any surface or submarine vessels between Oban, Mull and Lismore. There was a controlled minefield in the Sound of Kerrera, which was operated from a building near the caravan site at Gallanach. There was also a Royal Air Force flying boat base at Ganavan and on Kerrera, and an airfield at North Connel built by the Royal Air Force. A Sector Operations Room was built near the airfield; after the war, this was extended to become the Royal Observer Corps Group HQ.

Oban was also important during the Cold War because the first Transatlantic Telephone Cable (TAT-1) came ashore at Gallanach Bay. This carried the Hot Line between the US and USSR presidents.

Since the 1950s, the principal industry has remained tourism, though the town is also an important ferry port, acting as the hub for ferries to many of the Hebrides.

As with the rest of the British Isles, Oban experiences a maritime climate with cool summers and mild winters. The nearest official Met Office weather station for which online records are available is Dunstaffnage, about 2.7 miles (4.3 km) north-north east of Oban town centre. Rainfall is high, but thanks to the Gulf stream the temperature seldom falls below zero.

The local culture is Gaelic. In 2011, 8.2% of the town's population over age 3 could speak Gaelic and 11.3% had some facility in the language. Oban is considered the home of the Royal National Mòd, since it was first held there in 1892, with ten competitors on a Saturday afternoon. The town hosted the centenary Mod in 1992 (the year it became Royal) and in 2003 the 100th Mod, the two events attracting thousands of competitors and visitors (the 100th Mod was later than the centenary because it was not held in the war years). The Mod is held in Oban roughly every 6–8 years, and has last been held in October 2015.

An annual Highland Games, known as the Argyllshire Gathering, is also held in the town.

The Corran Halls theatre acts as a venue for community events, local and touring entertainers, and touring companies such as Scottish Opera.

The town had a two-screen cinema, which was closed in early 2010. Thanks to a local community initiative, and supported by a number of famous names, it was reopened in August 2012 as the Phoenix Cinema. Oban has itself been used as a backdrop to several films, including Ring of Bright Water and Morvern Callar.

The Oban War and Peace Museum advances the education of present and future generations by collecting, maintaining, conserving and exhibiting items of historical and cultural interest relating to the Oban area in peacetime and during the war years. A museum also operates within Oban Distillery, just behind the main seafront. The distillation of whisky in Oban predates the town: whisky has been produced on the site since 1794. The Hope MacDougall collection is a unique record of the working and domestic lives of people in Scotland.

Music is central to Gaelic culture, and there is lively interest in the town. In the 2010 Pipe Band season, the local Oban High School Pipe Band, led by Angus MacColl, was successful in winning the World Pipe Band Championships in Glasgow, the Cowal Games competition, and the Champion of Champions for the year in the novice-juvenile grade. The town also boasts a successful senior pipe band. The local Gaelic choir competes regularly and successfully in the Mod.

During the 2011 Guy Fawkes Night, Oban became briefly infamous for its fireworks display, which became a worldwide news and online hit when £6,000 of display fireworks were ignited all at once due to a computer error. The display, which was due to last 20–30 minutes, was over in less than a minute. Pyro1, the company putting on the display, later said sorry to the town by providing a free fireworks show.

The town has been the birthplace and home of a number of well known people.

Oban Bay from McCaig's Tower. The bay is sheltered by the island of Kerrera. Behind lies the Isle of Mull.

Oban and bay at night, note McCaig's Tower is illuminated.

The area around Oban is rich with attractions for tourists, from the dramatic scenery of the coast and mountains to the fascinating histories of the local castles and ancient religious sites. There are also many activities available for families and those interested in more active pursuits. The Oban and Lorn tourist information website has detailed information for visitors.

The Oban Visitor Information Centre, operated by VisitScotland, is located in the Columba Buildings on the North Pier. 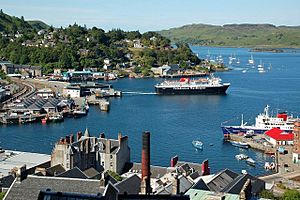 The Isle of Mull ferry leaving the terminal

Oban lies at the western end of the A85 road. It also has a railway station from where a number of First ScotRail trains run to and from Glasgow Queen Street daily. The town is also an important ferry port: it is Caledonian MacBrayne's busiest terminal. Oban is known as the "Gateway to the Isles", with ferries sailing to the islands of Lismore, Colonsay, Islay, Coll, Tiree, to Craignure on Mull, to Castlebay on Barra and to Lochboisdale on South Uist. In 2005, a new ferry terminal was opened, and in 2007 a second linkspan opened, allowing two vessels to load/unload at the same time.

West Coast Motors operate many local services and also coach links as far south as Lochgilphead and as far north as Fort William.

Oban has an airport outside the village of North Connel, some 5 miles NE of the town. In 2007, a further airlink was created between Oban and west-central Scotland: seaplanes fly from Glasgow city centre's Seaplane Terminal off the Clyde to the bay in Oban.

Laurinburg, North Carolina (United States) became a sister city to Oban in 1993. The initial agreement was between Scotland County, North Carolina, and Argyll & Bute District Council. Following reorganisation in 1995, the agreement was confirmed by Argyll & Bute Council in 1997. In 1997 Oban was also twinned with Gorey, County Wexford, in Ireland.

All content from Kiddle encyclopedia articles (including the article images and facts) can be freely used under Attribution-ShareAlike license, unless stated otherwise. Cite this article:
Oban Facts for Kids. Kiddle Encyclopedia.