ScotRail is a train operating company in the United Kingdom owned by Abellio operating the ScotRail franchise. 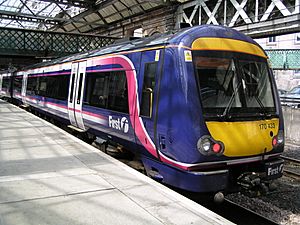 National Express operated the ScotRail franchise from March 1997 until October 2004.

On 28 July 2003 Transport Scotland announced Arriva, First and National Express had been chosen to bid for the new franchise.

On 11 June 2004 Transport Scotland awarded the new franchise to First with the services operated by ScotRail moving to First ScotRail on 17 October 2004. It originally traded as First ScotRail before being rebranded as ScotRail in September 2008.

On 8 October 2014, Abellio were awarded the franchise beating First. They started running the trains in April 2015.

All content from Kiddle encyclopedia articles (including the article images and facts) can be freely used under Attribution-ShareAlike license, unless stated otherwise. Cite this article:
ScotRail Facts for Kids. Kiddle Encyclopedia.