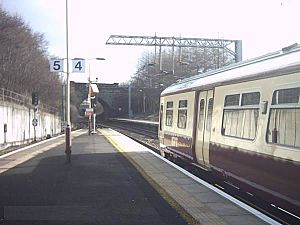 A Class 320 unit at Dalmuir platform 4, on a limited stop Helensburgh-Springburn via Glasgow Queen Street low level service, on the North Clyde Line.

What with the introduction of the class 380 dsiros for the Inverclyde line, the class 334s will be put to service on the Airdrie to Bathgate route, the class 320s will be split between the cathcart circle lines and the Argyll line, 14 of the 1990 built EMUs will be put to work on the Glasgow - Newton, Neilston and Cathcart Circle lines, while the remaining units shall work alongside the class 318s on the North Clyde/Argyll lines. This can not happen without, the class 320s bogies being upgraded, currently, they have a 75 mph top speed, in November 2010 the class will be driven under their own power to WABTEC Doncaster by GBRF drivers where they will be given a full refurbishment scheme which shall include new seats, toilets fitted, painting into the new scotrail saltire livery and their top speed raised to 90 mph.

All content from Kiddle encyclopedia articles (including the article images and facts) can be freely used under Attribution-ShareAlike license, unless stated otherwise. Cite this article:
British Rail Class 320 Facts for Kids. Kiddle Encyclopedia.