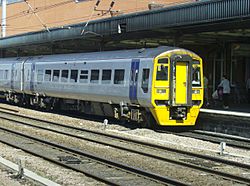 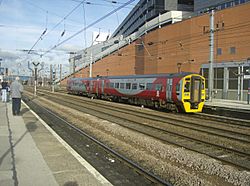 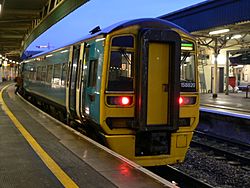 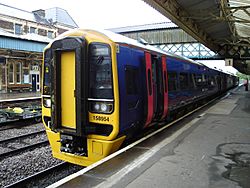 158954 at Newport in the current First Great Western livery 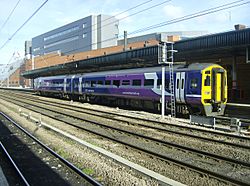 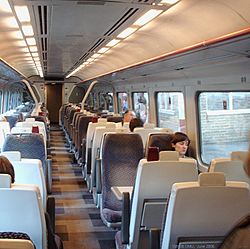 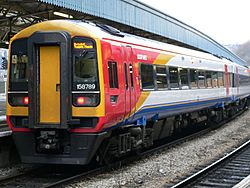 158789 at Bristol Temple Meads on 7 December 2005, having formed a South West Trains service from London Waterloo

British Rail Class 158 Express Sprinter is a type of diesel multiple unit (DMU) train. They were built for British Rail between 1989 and 1992 by BREL at their Derby Works. They were built to replace old DMUs and locomotive-hauled passenger trains. Class 159 trains are almost the same as Class 158s. They work many non-electrified services such as Exeter St David's To London Waterloo. They were among the last new trains in the UK to be built with the old toilet system which emptied directly onto the track.

All content from Kiddle encyclopedia articles (including the article images and facts) can be freely used under Attribution-ShareAlike license, unless stated otherwise. Cite this article:
British Rail Class 158 Facts for Kids. Kiddle Encyclopedia.