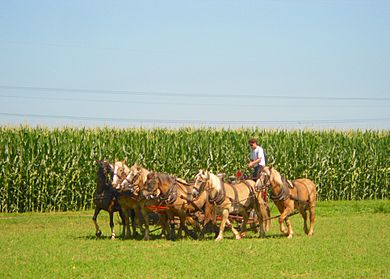 Horsepower is a unit of power that is approximately how much work one horse can do. It is equal to 746 watts. The idea of horsepower was originated by James Watt, who invented the steam engine. Because people used horses to pull carts, it was an amount of energy that could be understood by most people at that time. A human can only maintain about 0.1 horsepower, but an engine can maintain much higher than that. Small motors can create 10 horsepower while a jet engine can create more than 1,000 horsepower.

All content from Kiddle encyclopedia articles (including the article images and facts) can be freely used under Attribution-ShareAlike license, unless stated otherwise. Cite this article:
Horsepower Facts for Kids. Kiddle Encyclopedia.