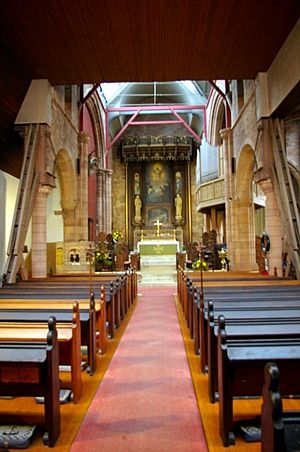 The MacDougalls of Dunollie and Campbells of Dunstaffnage began the project to build an episcopal church in Oban in 1846. The first church was completed in 1864 and as the town grew, so the church developed. The narthex was added in 1882 and then a grand scheme was begun in 1906. Funds ran out before construction finished - thus we are left with a unique Cathedral (designated as such in 1920) with each phase clearly visible in the Cathedral you see today and our famous steel girders still supporting the incomplete vision of a grand structure.

All content from Kiddle encyclopedia articles (including the article images and facts) can be freely used under Attribution-ShareAlike license, unless stated otherwise. Cite this article:
St John's Cathedral, Oban Facts for Kids. Kiddle Encyclopedia.