He was the only son of Alexander II with his second wife, Marie de Coucy. Alexander's father died on 6 July 1249 and he officially became king at the age of eight. This happened at Scone on 13 July, 1249. 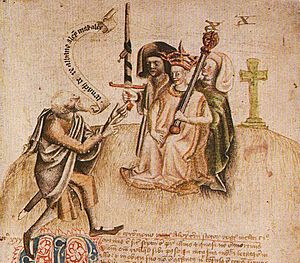 Coronation of King Alexander on Moot Hill, Scone. He is being greeted by the ollamh rígh, the royal poet, who is addressing him with the proclamation "Benach De Re Albanne" (Beannachd Dé Rígh Alban, "God Bless the King of Scotland"). The poet goes on to recite Alexander's family history.

All content from Kiddle encyclopedia articles (including the article images and facts) can be freely used under Attribution-ShareAlike license, unless stated otherwise. Cite this article:
Alexander III of Scotland Facts for Kids. Kiddle Encyclopedia.