Kids Encyclopedia Facts
Not to be confused with Roxborough Castle. 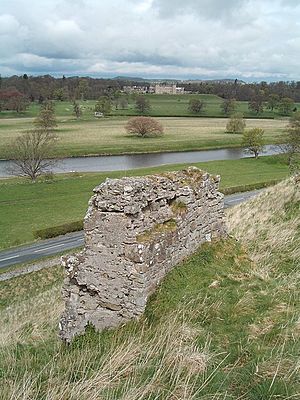 Ruins of Roxburgh Castle, with Floors Castle in the background 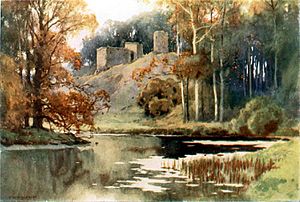 Roxburgh Castle is a ruined royal castle that overlooks the junction of the rivers Tweed and Teviot, in the Borders region of Scotland. Its castleton developed into the royal burgh of Roxburgh, which the Scots destroyed along with the castle after capturing it in 1460. Today the ruins stand in the grounds of Floors Castle, the seat of the Duke of Roxburghe, across the river from Kelso.

Tradition states that King David I founded the castle; it is first recorded in c.1128 during his reign. In 1174, it was surrendered to England after the capture of William I at Alnwick, and was often in English hands thereafter. The Scots made many attempts to regain the fortress. King Edward I of England imprisoned Mary Bruce in a cage hung outside the castle from 1306 to 1310. On 19 February 1314, it was retaken by Sir James Douglas (the "Black Douglas"), in a night attack. His men clothed in black cloaks were apparently mistaken for cattle. They then used rope and board ladders to climb the walls. King Robert the Bruce ordered the castle demolished by his brother Edward Bruce, Earl of Carrick, and in the words of the Lanercost Chronicle "all that beautiful castle the Scots pulled down to the ground, like the other castles that they had succeeded in capturing, lest the English should ever again rule the land by holding the castles." It was recaptured by the English during the Second War of Scottish Independence.

The castle was Edward III of England's base of operations during his 1334 winter campaign against the Scots. A Scottish siege in 1417 necessitated repairs. The Scots again besieged Roxburgh in 1460; in the course of the action metal fragments from the explosion of one of his bombards killed King James II of Scotland. However, the Scots stormed Roxburgh, capturing it, and James' queen, Mary of Guelders, had the castle demolished.

In 1545, during the war of the Rough Wooing, more accurately known as the Nine Years War, the English garrison commanded by Ralph Bulmer built a rectangular fort on the site at the instigation of the Earl of Hertford. In 1547, Hertford ordered the surveyor William Ridgeway and the Master Carpenter John Revell to build to a brewhouse, using a frame made for Wark Castle. Bulmer complained that Ridgeway's visits were infrequent and works incomplete. He wanted to build a blacksmith's forge and a bulwark to the south to give access to drinking water. This fort was destroyed in 1550 by the terms of the Treaty of Boulogne.

The ruins of Roxburgh Castle stand in the grounds of Floors Castle, the seat of the Duke of Roxburghe. These consist of a large mound, with some small fragments of stone walls, especially on the south side.

The 1314 capture of the castle is one of the inspirations of "The Three Perils of Man" by James Hogg.

All content from Kiddle encyclopedia articles (including the article images and facts) can be freely used under Attribution-ShareAlike license, unless stated otherwise. Cite this article:
Roxburgh Castle Facts for Kids. Kiddle Encyclopedia.