Duke of Roxburghe facts for kids 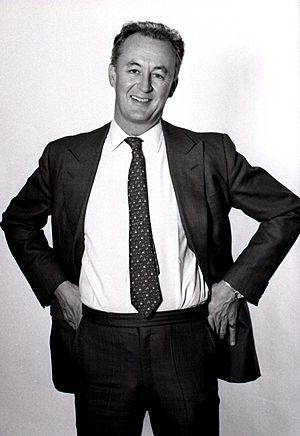 The Duke of Roxburghe (pronounced /ˈrɒksbərə/) is a title in the peerage of Scotland created in 1707 along with the titles Marquess of Bowmont and Cessford, Earl of Kelso and Viscount Broxmouth. John Ker, 5th Earl of Roxburghe became the first holder of these titles. The title is derived from the royal burgh of Roxburgh in the Scottish Borders, which was captured and destroyed by the Scots in 1460.

The Duke has the subsidiary titles of: Marquess of Bowmont and Cessford (created 1707), Earl of Roxburghe (1616), Earl of Kelso (1707), Earl Innes (1837), Viscount Broxmouth (1707), Lord Roxburghe (1600), and Lord Ker of Cessford and Cavertoun (1616). All of the titles form part of the peerage of Scotland, with the exception the Earldom of Innes, which belongs to the peerage of the United Kingdom. The Duke's eldest son bears the courtesy title of Marquess of Bowmont and Cessford.

The dukedom and its associated titles descend to heirs who shall inherit the earldom which in turn had a very specific line of descent. On the death of the 4th duke the titles became dormant as no one could prove their claim. In 1812 the House of Lords ruled in favour of Sir James Innes-Ker, 6th Baronet, of Innes (see Innes baronets), rejecting claims by the heir female of the second earl and heir male whatsoever of the first earl.

The Duke of Roxburghe would be the Chief of Clan Innes, but cannot be so recognised as he retains the name Innes-Ker.

The family has its seat at Floors Castle near Kelso, Scotland. The grounds contain the ruins of Roxburgh Castle on a promontory between the rivers Tweed and Teviot.

Ker and Innes-Ker Family Tree: Earls and Dukes of Roxburghe

All content from Kiddle encyclopedia articles (including the article images and facts) can be freely used under Attribution-ShareAlike license, unless stated otherwise. Cite this article:
Duke of Roxburghe Facts for Kids. Kiddle Encyclopedia.