Kelso (Scots: Kelsae), Scottish Gaelic: Cealsaidh is a market town in the Scottish Borders area of Scotland. Within the boundaries of the historic county of Roxburghshire, it lies where the rivers Tweed and Teviot have their confluence. The town has a population of 5,639 according to the 2011 census and based on the 2010 definition of the locality.

Kelso's main tourist draws are the ruined Kelso Abbey and Floors Castle. The latter is a house designed by William Adam which was completed in 1726. The Kelso Bridge was designed by John Rennie who later built London Bridge.

The town of Kelso came into being as a direct result of the creation of Kelso Abbey in 1128. The town's name stems from the fact that the earliest settlement stood on a chalky outcrop, and the town was known as Calkou (or perhaps Calchfynydd) in those early days, something that is remembered in the modern street name, "Chalkheugh Terrace". 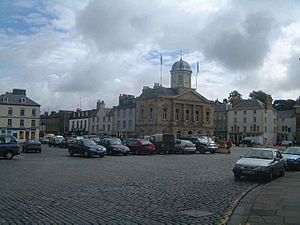 Standing on the opposite bank of the River Tweed from the now-vanished royal burgh of Roxburgh, Kelso and its sister hamlet of Wester Kelso were linked to the burgh by a ferry at Wester Kelso. A small hamlet existed before the completion of the abbey in 1128 but the settlement started to flourish with the arrival of the monks. Many were skilled craftsmen, and they helped the local population as the village expanded. The abbey controlled much of life in Kelso-area burgh of barony, called Holydean, until the Reformation in the 16th century. After that, the power and wealth of the abbey declined. The Kerr family of Cessford took over the barony and many of the abbey's properties around the town. By the 17th century, they virtually owned Kelso.

In Roxburgh Street is the outline of a horseshoe petrosomatoglyph where the horse of Charles Edward Stuart cast a shoe as he was riding it through the town on his way to Carlisle in 1745. He is also said to have planted a white rosebush in his host's garden, descendants of which are still said to flourish in the area.

For some period of time the Kelso parish was able to levy a tax of 2 pence (2d) on every Scottish pint of ale, beer or porter sold within the town. The power to do this was extended for 21 years in 1802 under the Kelso Two Pennies Scots Act when the money was being used to replace a bridge across the River Tweed that had been destroyed by floods. 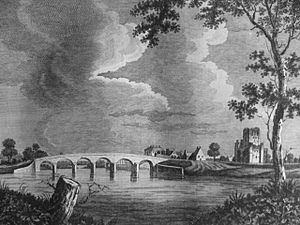 View of Kelso in the late 18th century 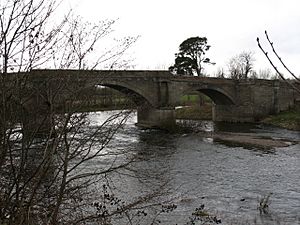 Kelso High School provides secondary education to the town, and primary education is provided by Edenside Primary and Broomlands Primary.

The town has much sport and recreation, the River Tweed at Kelso is renowned for its salmon fishing, there are two eighteen-hole golf courses as well as a National Hunt (jumping) horse racing track, the course is known as "Britain's Friendliest Racecourse", racing first took place in Kelso in 1822.

In 2005 the town hosted the 'World Meeting of 2CV Friends' in the grounds of nearby Floors Castle. Over 7,000 people took over the town and are said to have brought in more than £2,000,000 to the local economy.

According to a letter dated 17 October 1788, 'The workmen now employed in digging the foundations of some religious houses which stood upon St. James' Green, where the great annual fair of that name is now held in the neighbourhood of this town, have dug up two sone [sic] coffins of which the bones were entire, several pieces of painted glass, a silver coin of Robert II, and other antique relics'.

The town's rugby union club (Kelso RFC) are highly respected, claim to have the longest fixture between a Scottish and Welsh side, however this is the longest unbroken fixture.

Every year in July, the town celebrates the border tradition of Common Riding, known as Kelso Civic Week. The festival lasts a full week and is headed by the Kelsae Laddie with his Right and Left Hand Men. The Laddie and his followers visit neighbouring villages on horseback with the climax being the Yetholm Ride on the Saturday. Kelso hosts its annual fair on the first weekend of September. The festivities include dancing, street entertainers, live music, stalls and a free concert. The fair attracts about 10,000 people to the town.

Sir Walter Scott attended Kelso Grammar School in 1783 and he said of the town, "it is the most beautiful if not the most romantic village in Scotland". Another attraction is the Cobby Riverside Walk which goes from the town centre to Floors Castle along the banks of the Tweed passing the point where it is joined by the River Teviot. Kelso has two bridges that span the River Tweed, "Rennie's Bridge" was completed in 1803 to replace an earlier one washed away in the floods of 1797, it was built by John Rennie of Haddington, who later went on to build Waterloo Bridge in London, his bridge in Kelso is a smaller and earlier version of Waterloo Bridge. The bridge was the cause of local rioting in 1854 when the Kelso population objected to paying tolls even when the cost of construction had been covered, the Riot Act was read, three years later tolls were abolished. Hunter's Bridge, a kilometre downstream, is a modern construction built to take much of the heavy traffic that has damaged Rennie's bridge by diverting vehicles around the town.

Famous people from Kelso have included civil engineer Sir James Brunlees (1816–1892) who constructed many railways in the United Kingdom as well as designing the docks at Avonmouth and Whitehaven. Sir William Fairbairn (1789–1874) was another engineer who built the first iron hulled steamship the Lord Dundas and constructed over 1000 bridges using the tubular steel method which he pioneered. Thomas Pringle the writer, poet and abolitionist, was born at nearby Blakelaw, a 500-acre (2.0 km2) farmstead four miles (6 km) to the south of the town where his father was the tenant. Donald Farmer, a Victoria Cross recipient, was born in Kelso. 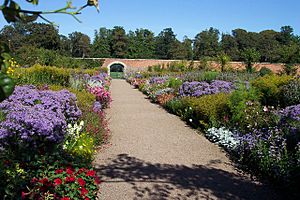 Floors Castle is a large stately home just outside Kelso. It is a popular visitor attraction. Adjacent to the house there is a large walled garden with a cafe, a small garden centre and the Star Plantation.

All content from Kiddle encyclopedia articles (including the article images and facts) can be freely used under Attribution-ShareAlike license, unless stated otherwise. Cite this article:
Kelso, Scottish Borders Facts for Kids. Kiddle Encyclopedia.