Kids Encyclopedia Facts
"The Borders" redirects here. For other uses, see Border (disambiguation).
For a description of the border, see Anglo-Scottish border. 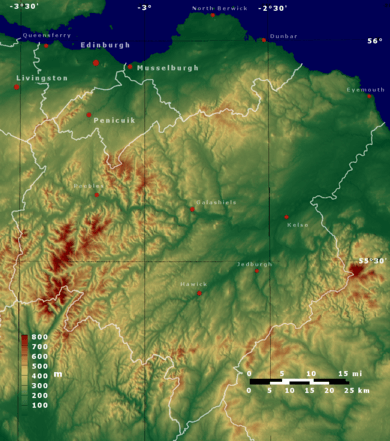 The Scottish Borders (Scots: The Mairches, lit. "The Marches") is one of 32 council areas of Scotland. It borders the City of Edinburgh, Dumfries and Galloway, East Lothian, Midlothian, South Lanarkshire, West Lothian and, to the south and east, Northumberland in England. The administrative centre of the area is Newtown St Boswells.

Historically, the name Scottish Borders designated the entire border region of southern Scotland and, together with neighbouring areas of England, was part of the historical Borders region.

The Scottish Borders are in the eastern part of the Southern Uplands.

The region is hilly and largely rural, with the River Tweed flowing west to east through it. In the east of the region, the area that borders the River Tweed is flat and is known as 'The Merse'. The Tweed and its tributaries drain the entire region with the river flowing into the North Sea at Berwick-upon-Tweed, and forming the border with England for the last twenty miles or so of its length.

The term Central Borders refers to the area in which the majority of the main towns of Galashiels, Selkirk, Hawick, Jedburgh, Earlston, Kelso, Newtown St. Boswells, St Boswells, Peebles, Melrose and Tweedbank are located.

Historically, the term Borders has a wider meaning, referring to all of the burghs adjoining the English border, also including Dumfriesshire and Kirkcudbrightshire — as well as Northumberland, Cumberland and Westmorland in England.

Roxburghshire and Berwickshire historically bore the brunt of the conflicts with England, both during declared wars such as the Wars of Scottish Independence, and armed raids which took place in the times of the Border Reivers. Thus, across the region are to be seen the ruins of many castles, abbeys and even towns.

The council area was created in 1975, by merging the former counties of Berwickshire, Peeblesshire, Roxburghshire, and Selkirkshire and part of Midlothian, as a two-tier region with the districts of Berwickshire, Ettrick and Lauderdale, Roxburgh, and Tweeddale within it. In 1996 the region became a unitary authority area and the districts were wound up. The region was created with the name Borders. Following the election of a shadow area council in 1995 the name was changed to Scottish Borders with effect from 1996.

Although there is evidence of some Scottish Gaelic in the origins of place names such as Innerleithen ("confluence of the Leithen"), Kilbucho and Longformacus, which contain identifiably Goidelic rather than Brythonic Celtic elements, the language has tended to be weak to non-existent in most parts of the region. Since the 5th century, there has been evidence of two main languages in the area: Brythonic (in the west) and Old English (in the east), the latter of which developed into its modern forms of English and Scots.

The region had until September 2015 no working railway stations. Although the area was well connected to the Victorian railway system, the branch lines that supplied it were closed in the decades following the Second World War. A bill was passed by the Scottish Parliament to extend the Waverley Line, which aimed to re-introduce a commuter service from Edinburgh to Stow, Galashiels and Tweedbank. This section of the route re-opened on 6 September 2015, under the Borders Railway branding. The other railway route running through the region is the East Coast Main Line, with Edinburgh Waverley, Dunbar and Berwick being the nearest stations on that line, all of which are outwith the Borders. A new station has been authorised to be constructed at Reston which is within the region and would serve Eyemouth. Opening expected in 2016 as part of a new ScotRail service between Edinburgh and Berwick-upon-Tweed. To the west, Carlisle, Carstairs and Lockerbie are the nearest stations on the West Coast Main Line.

The area is served by buses which connect the main population centres. Express bus services link the main towns with rail stations at Edinburgh and Carlisle.

The region also has no commercial airports; the nearest are Edinburgh and Newcastle, both of which are international airports.

The main roads to and from the region are: 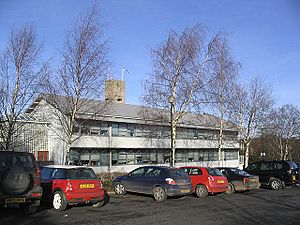 All content from Kiddle encyclopedia articles (including the article images and facts) can be freely used under Attribution-ShareAlike license, unless stated otherwise. Cite this article:
Scottish Borders Facts for Kids. Kiddle Encyclopedia.