Kids Encyclopedia Facts
This page is about a municipal district in Scotland. For other uses, see Midlothian (disambiguation).

Midlothian was also the name of a historic county formed in the Middle Ages. The county included Edinburgh and was formerly known as Edinburghshire, or more formally as the County of Edinburgh, until 1890. The historic county remains a lieutenancy area and a registration county for which purposes Edinburgh is included.

Midlothian Council area was created in 1996, under the Local Government etc. (Scotland) Act 1994, with the boundaries of the Midlothian district of the Lothian region. The district had been created in 1975, under the Local Government (Scotland) Act 1973, and it consisted of the local government county of Midlothian, minus the burgh of Musselburgh – with the areas of Inveresk, Wallyford and Whitecraig being lost to East Lothian, the Calders (East Calder, Midcalder and West Calder) and the Midlothian part of Livingston to West Lothian, Heriot and Stow parishes to the Ettrick and Lauderdale district of Borders Region, and Currie, Balerno, Ratho and Newbridge to Edinburgh.

Civil Parishes in the County of Midlothian 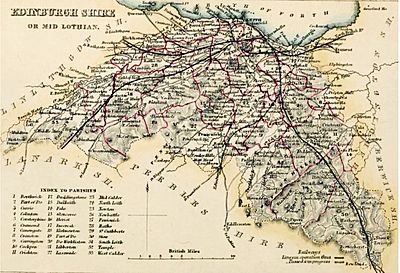 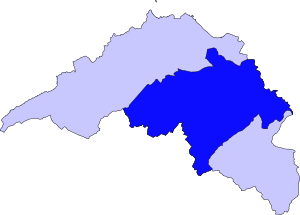 The above list does not include parishes which have been within the City of Edinburgh for county purposes since 19th century, namely within the "County of the City" of which the Lord Provost was and is Lord Lieutenant.

Midlothian is twinned with Komárom-Esztergom in Hungary and Kreis Heinsberg in Germany. It is a sister city with Midlothian, Illinois, a suburb of Chicago.

The Battle of Roslin was a battle of the First War of Scottish Independence, taking place on 24 February 1303 at Roslin, Midlothian. A Scottish army led by Simon Fraser and John Comyn defeated the English. The English force was raised in Northumberland and was tasked with intervening in support of the occupation forces of Edward I. The much smaller Scottish force rode through the night from Biggar, intercepted them and defeated them in two, possibly three, sharp fights. The site of the battle has been said to be the field opposite the old and new burial grounds. Members of the Comyn, Fraser and possibly Sinclair families fought at the Battle of Roslin.

All content from Kiddle encyclopedia articles (including the article images and facts) can be freely used under Attribution-ShareAlike license, unless stated otherwise. Cite this article:
Midlothian Facts for Kids. Kiddle Encyclopedia.