Roslin (formerly spelt Rosslyn or Roslyn; Scottish Gaelic: Riasg Linne) is a village in Midlothian, Scotland, 11 kilometres (7 mi) to the south of the capital city Edinburgh. It stands on high ground, near the northwest bank of the river North Esk.

The name Roslin (recorded around 1240 as Roskelyn) probably derives from the Celtic words ros, meaning a moor, and celyn, meaning holly. An alternative derivation is from Gaelic ros, meaning a rocky promontory, and linne, meaning a waterfall or pool. The theory that it is a corruption of Roseline, a supposed medieval meridian passing through Paris and Rosslyn Chapel, is fanciful.

Legend has it the village was founded in 203 A.D. by Asterius, a Pict.

In 1303 Roslin was the site of a battle of the First War of Scottish Independence.

In 1446, Rosslyn Chapel was constructed, under the guide of William Sinclair, 1st Earl of Caithness.

Roslin became important as the seat of the St Clair (or Sinclair) family. In 1456 King James II granted it the status of a burgh. Coal mining has been a major occupation from the twelfth to the late twentieth centuries.

From the 19th century onward, the attractions of the Glen, Castle and Chapel developed Roslin as a popular tourist destination. Notable visitors included J. M. W. Turner, William Wordsworth (who wrote a poem in the chapel whilst escaping a storm) and his sister Dorothy, who wrote “'I never passed through a more delicious dell than the glen of Rosslyn”. William Morris visited in March 1887, noting in his Socialist Diary that Roslin was "a beautiful glen-ny landscape much spoiled . . . by the misery of Scotch building and a manufactory or two."

On the north-western side of the village used to be Roslin Institute, a biological research establishment, where in 1996 Dolly the sheep became the first animal to be cloned from an adult somatic cell. It moved to Easter Bush in 2011.

The village sits on the west side of Roslin Glen, now a country park. Overlooking the Glen are Rosslyn Chapel and Roslin Castle. 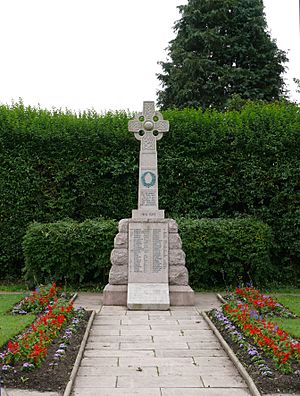 The elaborately carved chapel has long been associated with the Knights Templar and the Grail legend, and featured in the best selling book The Da Vinci Code. The popularity of the book and the use of the chapel as a location in the subsequent film greatly increased the number of visitors to the village.

Rosslyn Castle, owned by the family of the Earl of Rosslyn since the 14th century, is in partial ruins. The habitable parts are let as holiday accommodation.

A monument cairn erected by the Roslin Heritage Society at the end of last century, marks the site of the Battle of Roslin.

All content from Kiddle encyclopedia articles (including the article images and facts) can be freely used under Attribution-ShareAlike license, unless stated otherwise. Cite this article:
Roslin, Midlothian Facts for Kids. Kiddle Encyclopedia.