Bovril is the trademarked name of a thick and salty meat extract paste similar to a yeast extract, developed in the 1870s by John Lawson Johnston. It is sold in a distinctive, bulbous jar as cubes and granules. Bovril is owned and distributed by Unilever UK. Its appearance is similar to Marmite and Vegemite.

Bovril can be made into a drink by diluting with hot water or, less commonly, with milk. It can be used as a flavouring for soups, broth, stews or porridge, or as a spread, especially on toast in a similar fashion to Marmite and Vegemite. 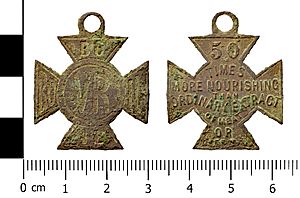 The first part of the product's name comes from Latin bovīnus, meaning "ox". Johnston took the -vril suffix from Edward Bulwer-Lytton's then-popular novel, The Coming Race (1870), the plot of which revolves around a superior race of people, the Vril-ya, who derive their powers from an electromagnetic substance named "Vril". Therefore, Bovril indicates great strength obtained from an ox. 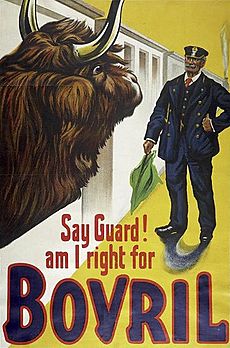 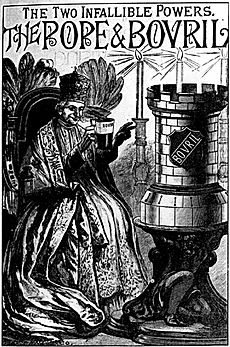 In 1870, in the Franco-Prussian War, Napoleon III ordered one million cans of beef to feed his troops. The task of providing this went to John Lawson Johnston, a Scotsman living in Canada. Large quantities of beef were available across the British Dominions and South America, but transport and storage were problematic. Therefore, Johnston created a product known as 'Johnston's Fluid Beef', later called Bovril, to meet Napoleon's needs. By 1888, over 3,000 UK public houses, grocers and dispensing chemists were selling Bovril. In 1889, Bovril Ltd was formed to develop Johnston's business further.

During the 1900 Siege of Ladysmith in the Second Boer War, a Bovril-like paste was produced from horse meat within the garrison. Nicknamed Chevril (a portmanteau of Bovril and cheval, French for horse) it was produced by boiling down horse or mule meat to a jelly paste and serving it as a "beef tea".

Bovril continued to function as a "war food" in World War I and was frequently mentioned in the 1930 account Not So Quiet: Stepdaughters of War by Helen Zenna Smith. It describes the drink being prepared for the casualties at Mons where "the orderlies were just beginning to make Bovril for the wounded, when the bearers and ambulance wagons were shelled as they were bringing the wounded into the hospital".

Bovril beef tea was the only hot drink that Ernest Shackleton's team had when they were marooned on Elephant Island during the 1914-17 Endurance Expedition.

A thermos of beef tea was the favoured way to fend off the chill of winter season football matches for generations of British fans; Bovril dissolved in hot water is still sold in stadiums all over the United Kingdom.

Bovril's instant beef stock was launched in 1966 and its "King of Beef" range of instant flavours for stews, casseroles and gravy in 1971. In 1971, James Goldsmith's Cavenham Foods acquired the Bovril Company but then sold most of its dairies and South American operations to finance further take-overs. The brand is now owned by Unilever.

Bovril holds the unusual distinction of having been advertised with a Pope. An advertising campaign of the early 20th century in Britain depicted Pope Leo XIII seated on his throne, bearing a mug of Bovril. The campaign slogan read: The Two Infallible Powers – The Pope & Bovril.

Bovril is produced in South Africa by the Bokomo division of Pioneer Foods.

In 2004, Unilever removed beef ingredients from the Bovril formula, rendering it vegetarian. This was mainly due to concerns about decreasing sales, particularly from exports due to an export ban on British beef, as a result of the growing popularity of vegetarianism, religious dietary requirements, and public concerns about bovine spongiform encephalopathy. In 2006, Unilever reversed that decision and reintroduced beef ingredients to their Bovril formula once sales increased and the beef export bans were lifted. Unilever now produces Bovril using beef extract and a chicken variety using chicken extract.

In November 2020, Forest Green Rovers Football Club announced a collaboration with the makers of Bovril to create a beet-based version of Bovril to be sold at their New Lawn stadium, where meat-based products had been removed from sale some years prior. 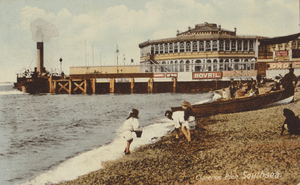 Advertisement for Bovril at Southsea, c. 1914 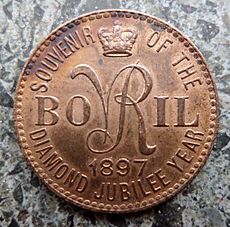 Since its invention, Bovril has become an icon of British culture. It is commonly associated with football culture, since during the winter British football fans in stadium terraces often drink it from Thermos flasks; or from disposable cups in Scotland, where thermoses are banned from football stadiums.

In the film In Which We Serve, the officers on the bridge are served "Bovril rather heavily laced with sherry" to warm them up, after being rescued during the Dunkirk evacuation of the British Expeditionary Force.

British mountaineer Chris Bonington appeared in TV commercials for Bovril in the 1970s and 1980s in which he recalled melting snow and ice on Everest to make hot drinks.

All content from Kiddle encyclopedia articles (including the article images and facts) can be freely used under Attribution-ShareAlike license, unless stated otherwise. Cite this article:
Bovril Facts for Kids. Kiddle Encyclopedia.