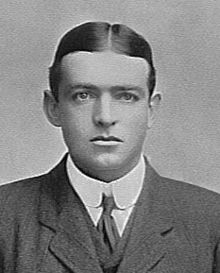 Shackleton as a young man

Shackleton led three British expeditions to the Antarctic. He was one of the principal figures of the "Heroic Age of Antarctic Exploration". The Shackletons were originally from Yorkshire, but Shackleton was born in County Kildare, Ireland. Shackleton and his Anglo-Irish family moved to Sydenham in suburban London when he was ten.

His first experience of the polar regions was as third officer on Captain Robert Falcon Scott's Discovery Expedition, 1901–04, from which he was sent home early on health grounds. Determined to do better, he returned to Antarctica in 1907 as leader of the Nimrod Expedition. In January 1909, he and three companions made a southern march. They went to the farthest South latitude anyone had reached, at 88° 23' S, 97 geographical miles (112 statute miles, 180 km) from the South Pole. This was by far the closest to the pole in exploration history up to that time. For this achievement, Shackleton was knighted by Edward VII on his return home.

Shackleton first went to the Antarctic on Captain Robert Scott's 1901-1904 expedition but he was sent home as he was ill. In 1907, he went back to the Antarctic and in January 1909 was part of a group who walked further south than anyone had ever been before, travelling to within 190 kilometres (120 mi) of the South Pole. In 1912 the Norwegian explorer Roald Amundsen became the leader of the first group to reach the South Pole. Shackleton decided on a new target, he wanted to walk across Antarctica from one side to the other crossing the South Pole in the middle.

Disaster struck when his ship, Endurance, was trapped in the ice. They spent 281 days on board waiting for the ice to break again, but the boat was slowly crushed to pieces. Shackleton and his men dragged their lifeboats over many miles of snow and ice to reach sea. They set sail in the lifeboats and eventually reached Elephant Island. In April 1916, Shackleton and four others sailed hundreds of miles to South Georgia to get help at the whaling station there. This was a journey of 1,300 kilometres (810 mi) and took 16 days. Unfortunately the boat he was in landed on the wrong side of the island and they had to climb over the mountainous middle section to reach the whaling station. A rescue party saved everyone from Elephant Island in August 1916.

In 1921, Shackleton returned to the Antarctic, intending to carry out a programme of scientific activities. Before the expedition could begin this work, Shackleton died of a heart attack on 5 January 1922 while his ship, Quest, was moored in South Georgia. At his wife's request, he was buried there.

All content from Kiddle encyclopedia articles (including the article images and facts) can be freely used under Attribution-ShareAlike license, unless stated otherwise. Cite this article:
Ernest Shackleton Facts for Kids. Kiddle Encyclopedia.