Kids Encyclopedia Facts
This page is about the suburb in London, England. For other uses, see Sydenham (disambiguation).

Sydenham is a suburban district of south-east London in the London Boroughs of Lewisham, Bromley and Southwark. Located in Kent until 1889, when the County of London was created, Sydenham was historically a very affluent town and the Crystal Palace from the Great Exhibition was relocated to Sydenham Hill in 1854. Bordering Forest Hill, Dulwich, Crystal Palace, Penge, Beckenham, Catford and Bellingham; Sydenham today is a diverse area with a 2011 population of 28,378.

A map showing the Sydenham ward of Lewisham Metropolitan Borough as it appeared in 1916.

Originally known as Shippenham, Sydenham began as a small settlement, a few cottages among the woods, whose inhabitants grazed their animals and collected wood. In the 1640s, springs of water in what is now Wells Park were discovered to have medicinal properties, attracting crowds of people to the area. Sydenham grew rapidly in the 19th century after the introduction of the Croydon Canal in 1809 which linked the Grand Surrey Canal to Croydon and a reservoir was constructed in Sydenham. However, the canal was never successful and closed in 1836 resulting in it being the first canal to be abandoned by an Act of Parliament. The London & Croydon Railway purchased the canal for £40,250 and quickly converted the alignment for a railway from London Bridge to West Croydon, opening in 1839. After the railway opened potential gas companies began to consider the Sydenham area with the Crystal Palace and District Gas Company having works at Bell Green, which continued production until 1969; a retail park now occupies most of the site. 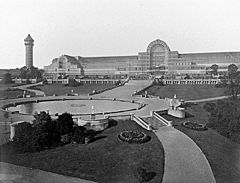 In 1851 the Great Exhibition in Hyde Park was housed in an immense glass building, called the Crystal Palace. In 1854 the building was bought by a private company, dismantled and re-erected in Sydenham Park (now called Crystal Palace Park). Exhibitions, concerts, conferences and sporting events were held at the Crystal Palace (until it burned down in 1936), and Sydenham became a fashionable area; many new houses were built. In 1872, the Children's Hospital, Sydenham opened. It closed in 1991, its services being now part of the University Hospital Lewisham.

In 1860, the Walter Cobb department store at Lawrie Place, Kirkdale (now known as Cobbs Corner) opened, lasting until the 1980s. In 1884, Upper Sydenham railway station opened on the Crystal Palace and South London Junction Railway linking Crystal Palace to London Victoria via Peckham Rye. The station and the line were poorly used despite new houses being built in the area, as passengers preferred to use other stations near-by Sydenham Hill (opening in 1863), Crystal Palace (Lower Level) and Sydenham which were on more direct routes. The ill fate of the Crystal Palace in 1936 saw patronage reduced and the route finally closed in 1954.

Sydenham was attacked by enemies during the Second World War. The gas works were a target, but were never damaged. The railway which ran through Upper Sydenham station was damaged, and some homes in the area were destroyed.

Sydenham is divided into several localities: 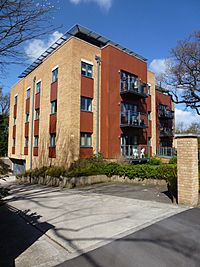 Sydenham Hill in the Boroughs of Lewisham and Southwark runs alongside Dulwich and Sydenham Woods on one of the highest points of Greater London being 112 metres above sea level. From here, the City of London skyline is visible. Sydenham Hill has an abandoned railway tunnel from the Crystal Palace and South London Junction Railway located within the Woods. Another railway tunnel (one of the longest in Britain being 1,958 metres) goes beneath on the Chatham Main Line with Sydenham Hill station at the London end serving both Sydenham Hill and the College area of Dulwich.

Upper Sydenham is also located on Sydenham Hill and is a part of the Parish of St Bartholomew. It is diverse both racially and in terms of income; the central section of Kirkdale was Sydenham's original High Street. Renamed "Kirkdale" in 1936, the area now has a small range of shops including Costcutter, Tesco Express, local pubs and off-licences. Sydenham School is located on Dartmouth Road with Forest Hill Library and Forest Hill Pools alongside Thorpewood Avenue. Green Flag awarded Sydenham Wells Park, the location of the once famous Springs is one of the largest parks within the postcode. Upper Sydenham is also the location of the Sydenham Park allotments, the Sydenham electricity sub station which had a major fire in 2008 and the Sydenham Hill estate.

Lower Sydenham & Bell Green is the location of Sydenham Community Library which was recently reopened by the local community after the Lewisham Council closed it. The Bell Green regeneration project is in its second phase with a new retail park which opened in 2013, on a site which was formally a gas works. The retail park is home to Currys PC World, B&Q, Toys "R" Us, Pets at Home, Sports Direct, Next (with Costa Coffee) and McDonald's among others. Sainsbury's have had a large store on one part of the site since the 1990s as part of the Savacentre brand and new residential apartments have also been constructed. The Bridge Leisure Centre is located on Kangley Bridge Road and Mayow Park is on the border with Forest Hill. Alongside the Hayes railway line and Lower Sydenham station, Lower Sydenham industrial estate houses the Clarkes of London coach company, City Link Beckenham and many other businesses as well as the Beckenham and Sydenham Cricket Ground.

Sydenham has a very active community, with several groups concerning the local area. Sydenham Town is the local website for the suburb, where residents can also voice their opinions in an on-line form. The Sydenham Society is a Civil society formed in 1972 to represent the local community. It holds local events, works with organisations and authorities as well as campaigning for improvements to the area. Green Flag and Mayor of London Award winner, Sydenham Garden, was formed in 2002. It is a charity which is involved in improving the health of residents in the boroughs of Bromley and Lewisham.

Sydenham with Forest Hill won a bid for the national Portas Pilot competition which provided a grant to improve high streets, extra money was provided from Lewisham Council and private developers. Annually every summer since 2009, the Sydenham Arts Festival is held, where there are workshops, music, family activities etc. 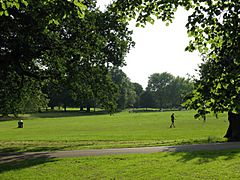 A number of parks are within the Sydenham postcode. Mayow Park, Lewisham's oldest municipal park and Sydenham Wells Park are both Green Flag Awarded. Other open spaces in Sydenham include Alexandra Recreation Ground, Baxters Field, Home Park and Kirkdale Green. Riverview Walk is a nature conservation area which runs along the River Ravensbourne from Catford. Additionally, located along the borders of Sydenham, there are Crystal Palace Park, Dulwich Woods, Southend Park and Sydenham Hill Woods.

Sydenham Arts is a local charitable organisation, promoting the arts for the local community, which provides free and ticketed cultural events at several festivals through the year. In June 2016, former Poet Laureate Sir Andrew Motion, who spoke at Sydenham Arts Festival in 2011, was quoted saying "Sydenham Arts Festival is exemplary: packed with high-quality speakers from elsewhere, but also fully alive to and supportive of things growing close to home. It means that imaginable adventures can combine with imaginative confirmations - just as they should. Long may it flourish." 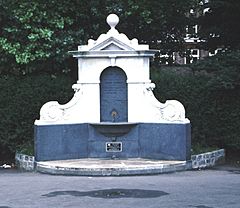 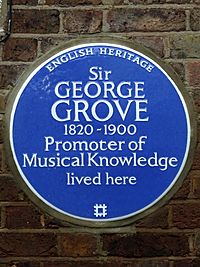 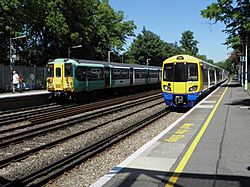 Sydenham is served by National Rail and London Buses for its public transport. Sydenham is located in Travelcard Zones 3 and 4.

The South Circular Road passes close by in Forest Hill. High Street improvements being funded by Transport for London from September 2012 are making the increasingly busy Sydenham Road (A212) more user friendly. So far, Kirkdale to Mayow Road has been completed, with Mayow Road to Kent House Road currently, as of December 2013, being upgraded. The Kent House Road to Bell Green section is still waiting for funding to be found. 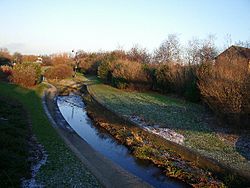 The River Pool at Lower Sydenham

Sydenham is approximately 7 miles (11 kilometres) to the south east of Charing Cross. It is also at the centre of many of south London's major shopping districts being 3 mi (5 km) south of Lewisham, 3.2 mi (5.1 km) north west of Bromley and 3 1⁄2 mi (5.6 km) north of Croydon.

The western parts of Sydenham, from Upper Sydenham and Forest Hill towards Crystal Palace Park is a more leafy, suburban area with some parts like the Lawrie Park and Thorpes areas being more affluent than others. Lower Sydenham at the bottom of more gentle slopes being east of Upper Sydenham, south of Forest Hill and west of Bellingham. The River Pool, a 5.1 mi (8.2 km) tributary of the River Ravensbourne straddles the east of Lower Sydenham along the Hayes railway line.

The Beast of Sydenham of 2005, was a large, panther-like black animal, named Arak, which had been spotted around the area, and attacked a man. The beast was said to be 6 ft in length and 3 ft in height. According to The Literary Miscellany, "John Hussey of Sydenham died in 1748 at the age of 116 years. For upwards of fifty years his breakfast had been balm-tea (lemon balm) sweetened with honey; and his dinner had been pudding; by which he acquired regular health".

All content from Kiddle encyclopedia articles (including the article images and facts) can be freely used under Attribution-ShareAlike license, unless stated otherwise. Cite this article:
Sydenham Facts for Kids. Kiddle Encyclopedia.