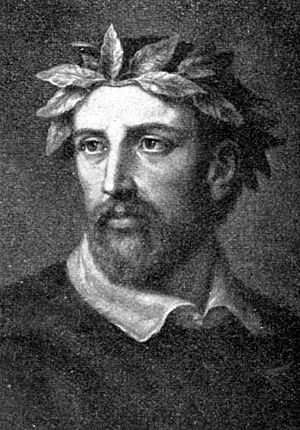 A depiction of Torquato Tasso from a German encyclopedia, 1905. Note the laurel crown.

A poet laureate is a poet officially appointed by the government of a country. He or she is responsible for writing poems for special occasions in that country, for example a coronation or military victory.

The first official Poet Laureate was Ben Jonson in 1619. There are also Poets Laureate in the United States, Canada, and New Zealand.

All content from Kiddle encyclopedia articles (including the article images and facts) can be freely used under Attribution-ShareAlike license, unless stated otherwise. Cite this article:
Poet laureate Facts for Kids. Kiddle Encyclopedia.