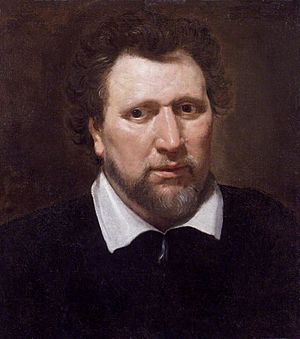 Ben Jonson (11 June 1572 – 6 August 1637) was a major poet and playwright in English Renaissance drama. Many critics consider Jonson to be among the best playwrights of his time, when William Shakespeare also lived. He is perhaps best known for two comedies, his plays Volpone and The Alchemist.

All content from Kiddle encyclopedia articles (including the article images and facts) can be freely used under Attribution-ShareAlike license, unless stated otherwise. Cite this article:
Ben Jonson Facts for Kids. Kiddle Encyclopedia.