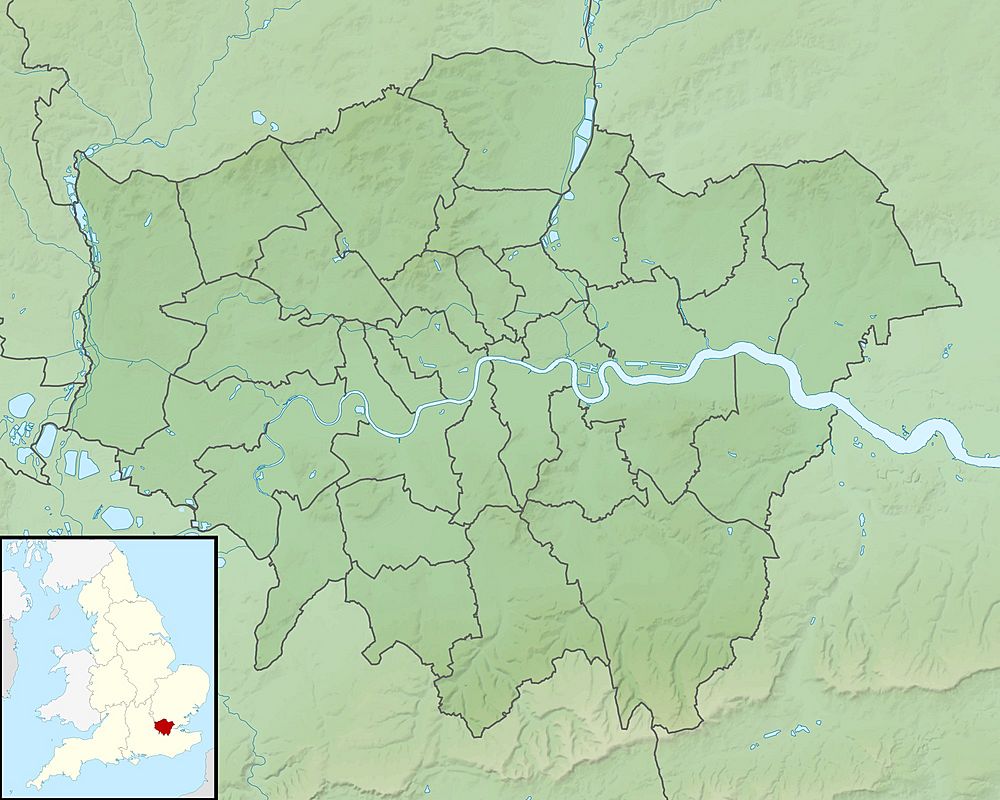 Extract from London's relief map showing how the relief covers the south of the London Borough of Southwark, overspills with crests to all other three sides and has areas of similar size surrounding which are nearly flat. In the north-east Blackheath/Shooters Hill is visible and in the far south a dip slope of the North Downs.

The Norwood Ridge is a 10-square-mile (26 km2) rectangular upland which occupies the geographical centre of south London, centred 5 miles (8 km) south of London Bridge. Beneath its topsoil it is a ridge of London Clay that is capped on all sides (including as isolated knolls in the north) with remaining natural gravel deposits mixed with some sandy soil, which in the South Thames basin is a material known as the Claygate Beds.

The area is rectangular, measuring 2 miles (3.2 km) broad. Its longest side is 5 miles (8.0 km) if measured from central Brockley around which are three related knolls including Rye Hill, Nunhead or 0.7 miles (1.1 km) less if the start-point of the ridge is taken as One Tree Hill, Honor Oak. The upland is visible on terrain maps as three main parts of different elevation.

The high, eastern ridge (Sydenham Hill Ridge) runs from One Tree Hill SSE forming: the high western halves of Honor Oak and Forest Hill, then Upper Sydenham, the east of Gipsy Hill and Crystal Palace (which has since the station of that name was built among many residents replaced the Sydenham Hill and Anerley Hill names except chiefly for the road Sydenham Hill which sits on the ridge), then Upper Norwood, then South Norwood Hill then the north-east of Thornton Heath and far north of Selhurst, in particular Grangewood Park. It includes the Crystal Palace transmitting station, founded in 1933, the main television transmitter for the London area and the ridge hosts Croydon transmitting station. The ridge is above 110 metres (360 ft) and from a few raised west-facing places the western ridge can be seen, beyond which is similar height Wimbledon Common. The north has very narrow peaks which allow views of the tall buildings of Central London, but the ridge's eastern slope widely commands unobstructed views over Bromley and Addiscombe to the rises of Chislehurst as well as higher Kent parts of the North Downs. Nineteen of its access or approaching roads could be mistaken as forming separate structures, the greatest of which is the broad south slope leading west, Beulah Hill:-

The slightly lower central near-plateau is listed from the north: East Dulwich; Dulwich; Kingswood Estate with West Dulwich and West Norwood with Gipsy Hill. Two rises within this zone are Dawson's Rise and Knight's Hill.

The second or western ridge is narrower and fractionally lower. It begins very broad and gradually in the south around Furzedown, Streatham then runs through central Streatham, Tulse Hill, Herne Hill, Denmark Hill/Champion Hill culminating at the crossroads of Dog Kennel Hill/Grove Hill/Champion Hill. Fourteen of its access points can be said to give areas of this rise their own 'Hill' or 'Mount' names:-

Some of the above slopes are in the catchment of the Effra, which had widespread Victorian housing and commercial use so has been converted into parallel combined and surface water sewers which feed into the Crossness works and tributaries of the tidal Thames respectively. In the east the south slopes feed the Pool.

To the south underlying layers of London Clay and Palaeocene between the ridge and the dip slope of the North Downs, where on the near side is the Graveney which feeds into the River Wandle..

The ridge and the historic oak tree known as The Vicars Oak (at the crossroads of the A212 Church Road and A214 Westow Hill) were used to mark parish boundaries. This has led to in particular the Crystal Palace area straddling the boundaries of five London Boroughs; Bromley, Croydon, Lambeth, Southwark and Lewisham. The area also straddles three postcode districts: SE19, SE20, and SE26. The ancient boundary between Surrey and Kent passes through the area and from 1889 to 1965 the area lay on the south eastern boundary of the County of London. It included parts of Kent and Surrey until 1889 and then parts of Kent, London and Surrey between 1889 and 1965.

For centuries the area was occupied by the Great North Wood, an extensive area of natural oak forest that formed a wilderness close to the southern edge of the then expanding city of London. The forest was a popular area for Londoners' recreation right up to the 19th century, when it began to be built over. Some of the area was a home of Gypsies, with some street names and pubs recording the link.

Beds of clay and brickearth around the ridge hosted until the 20th century some of London's brickfields. Many railway tunnels cut through the ridge. The ridge still retains many vestiges of woodland.

All content from Kiddle encyclopedia articles (including the article images and facts) can be freely used under Attribution-ShareAlike license, unless stated otherwise. Cite this article:
Norwood Ridge Facts for Kids. Kiddle Encyclopedia.