Nunhead is a place in the London Borough of Southwark in London, England. It is an inner-city suburb located 4 miles (6.4 km) southeast of Charing Cross. It is the location of the 52-acre (0.21 km2) Nunhead Cemetery. Nunhead has traditionally been a working-class area and, with the adjacent neighbourhoods, is currently going through a lengthy process of gentrification. Nunhead is the location of several underground reservoirs, built by the Southwark and Vauxhall Waterworks Company. 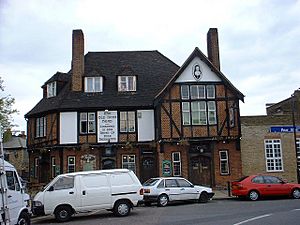 The name is first recorded in 1680 and is believed to be taken from a local inn named The Nun's Head. It is rumoured that this name refers to the beheading of a nun during the Dissolution of the Monasteries. However, there is no evidence to support this claim. 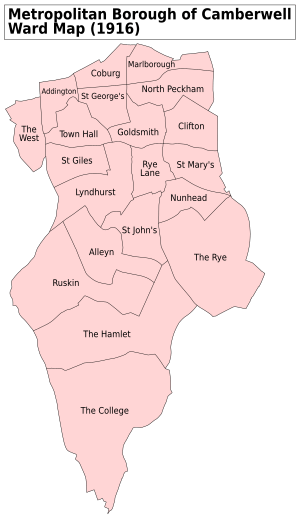 A map showing the Nunhead ward of Camberwell Metropolitan Borough as it appeared in 1916.

Nunhead formed part of the large ancient parish of Camberwell in the Brixton hundred of Surrey. It has not formed an independent unit of civil administration. Instead, as population grew, a separate St Antholin, Nunhead ecclesiastical parish was created in 1878, with a church built in 1877. The church was later rebuilt in 1957 as St Antony's Church. It was then Listed Grade II in 1972 but became surplus to requirements of the church and was declared redundant in 2001 and sold to its present owners. It then became the Lighthouse Cathedral. The area then came within the area of responsibility of the Metropolitan Board of Works in 1855 and was transferred to the County of London in 1889. Having formed part of the Camberwell parish, it became part of the Metropolitan Borough of Camberwell in 1900. In 1887 Nunhead is recorded as having a population of 10,727. There was a Nunhead Football Club from 1888 to 1949. Nunhead has some fine examples of late Victorian / early Edwardian properties; these can be seen on both Carden Road and Tresco Road. It is even reputed, in Claire Tomlin's biography of Charles Dickens' mistress Nelly Ternan, that Charles Dickens was taken on his death bed from the house he rented for Ternan, at Windsor Lodge in Linden Grove to Gad's Hill to die. The house no longers stands, but was at 31 Linden Grove. Old maps show that the church was next door to where the dental surgery now stands at 42 Linden Grove, so Windsor Lodge was presumably more or less opposite that.

Nunhead forms part of Southwark London Borough Council's Peckham Programme regeneration scheme. As part of this plan, the area forms part of the East Peckham and Nunhead renewal area. A component of this regeneration is the proposal that the Cross River Tram could serve the area, however in November 2008 Mayor of London Boris Johnson announced that due to funding constraints this project would be cancelled. 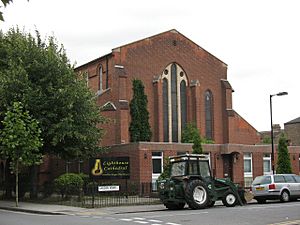 The Lighthouse Cathedral, the current name of this church, which was built in 1957 to the designs of Lawrence King as St Anthony's (for the Church of England). The previous church on the site (destroyed by wartime bombing in 1940) was called St Antholin's and built in 1877.

Gibbon Road is the location of Nunhead railway station. The station is located on the line from Blackfriars to Sevenoaks and Victoria to Dartford. Train services are provided by Southeastern. The area is also served by a variety of London Buses services. Bus route 78 starts in Nunhead and terminates in trendy Shoreditch also via the commercial area surrounding Liverpool Street as well as going over famous Tower Bridge and bypassing the historical Tower of London. The P12, which begins its journey in Brockley, goes through Nunhead, terminating at Surrey Quays shopping center so a useful route for shoppers. As part of the urban sprawl of London, Nunhead is contiguous with the neighbourhoods of Brockley to the east, Honor Oak to the south, East Dulwich to the south west, Peckham to the north west and New Cross to the north east.

Nunhead Beats the Bounds is an annual event where Nunhead residents march around the perimeter of Nunhead - from Queens Road to Camberwell New Cemetery - to build community spirit. It is generally held the first Saturday afternoon in July.

Nunhead American Radio with Lewis Schaffer on Resonance 104.4FM is a radio programme for and about the residents of Nunhead, with special focus on the immigrant American community.

All content from Kiddle encyclopedia articles (including the article images and facts) can be freely used under Attribution-ShareAlike license, unless stated otherwise. Cite this article:
Nunhead Facts for Kids. Kiddle Encyclopedia.