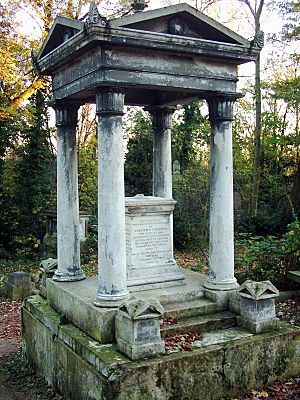 Nunhead Cemetery is one of the Magnificent Seven cemeteries in London, England. It is perhaps the least famous and celebrated of them. The cemetery is located in Nunhead in the London Borough of Southwark and was originally known as All Saints' Cemetery. Nunhead Cemetery was consecrated in 1840 and opened by the London Cemetery Company. It is a Local Nature Reserve.

The Main Gate (North Gate) is located on Linden Grove (near the junction with Daniel's Road) and the South Gate is located on Limesford Road. The cemetery is in the London Borough of Southwark, SE15.

Consecrated in 1840, with an Anglican chapel designed by Thomas Little, it is one of the Magnificent Seven Victorian cemeteries established in a ring around what were then the outskirts of London. The first burial was of Charles Abbott, a 101-year-old Ipswich grocer; the last burial was of a volunteer soldier who became a canon of Lahore Cathedral. The first grave in Nunhead was dug in October 1840. The average annual number of burials over the ten years 1868–1878 was 1685: 1350 in the consecrated, and 335 in the unconsecrated ground.

In the cemetery were reinterred remains removed, in 1867 and 1933, from the site of the demolished St Christopher le Stocks church in the City of London.

The cemetery contains examples of the imposing monuments to the most eminent citizens of the day, which contrast sharply with the small, simple headstones marking common or public burials. By the middle of the 20th century the cemetery was nearly full, and so was abandoned by the United Cemetery Company. With the ensuing neglect, the cemetery gradually changed from lawn to meadow and eventually to woodland. It is now a Local Nature Reserve and Site of Metropolitan Importance for wildlife, populated with songbirds, woodpeckers and tawny owls. A lack of care and cash surrendered the graves to the ravages of nature and vandalism, but in the early 1980s the Friends of Nunhead Cemetery were formed to renovate and protect the cemetery.

The cemetery was reopened in May 2001 after an extensive restoration project funded by Southwark Council and the Heritage Lottery Fund. Fifty memorials were restored along with the Anglican Chapel. 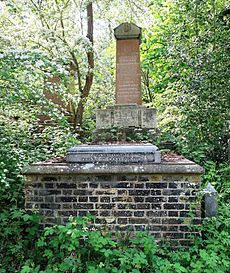 Layout and other structures 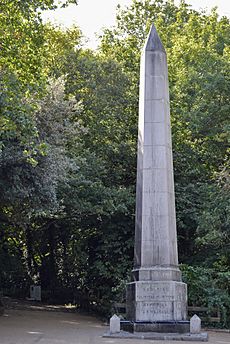 At 52 acres, Nunhead is the second largest of the Magnificent Seven cemeteries. Views across London include St Paul's Cathedral.

The Victorian part of the cemetery is currently in a poor state of repair, being best described as an elegant wilderness; locals like to call it a nature reserve. Many areas of the cemetery are fairly overgrown with vines, as visible in newer tourist photos. Numerous tombstones lean to the side. Although the Friends of Nunhead Cemetery are doing their best to restore some parts of the cemetery it is badly in need of care and funding. It is about 52 acres (210,000 m2) and is a popular place to walk.

The lodges and monumental entrance were designed by James Bunstone Bunning. There is an obelisk, the "Scottish Political Martyrs Memorial", the second monument (the other is in Edinburgh) dedicated to the leaders of the Friends of the People Society, popularly called the Scottish Martyrs, including Thomas Muir, Maurice Margarot, and Thomas Fyshe Palmer, who were transported to Australia in 1794. It was erected by Radical MP Joseph Hume in 1837. It is immediately on the right on Dissenters Road, when entering through the North Gate.

A memorial commemorates nine Sea Scouts who died in the Leysdown Tragedy off the Isle of Sheppey in 1912, including Percy Baden Powell Huxford aged 12 (named after, but not related to, Lord Baden Powell). The original memorial, designed by Sir Giles Gilbert Scott, was erected in 1914. Most of this was removed after vandalism, and only the base remains. The present replacement memorial was erected in 1992, on the initiative of the Friends of Nunhead Cemetery. 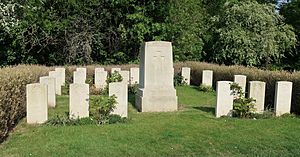 There are a large number of First and Second World War war graves in the cemetery, the greater proportion (592 graves) being Commonwealth service burials from the former war. Most of those are concentrated between three war graves plots: the United Kingdom plot (Square 89), holding 266 graves, the Australian plot which holds 23 graves, and the Canadian plot (Square 52) which holds 36 graves, including burials of South African and New Zealand servicemen. Those buried in the UK plot and in individual graves outside the three plots are, because of not being marked by headstones, listed by name on a Screen Wall memorial inside the cemetery's main entrance. A second Screen Wall lists 110 Commonwealth service personnel of the Second World War who are buried in another war graves plot (Square 5), and elsewhere whose graves could not be marked by headstones. There is also a Belgian war grave of the First World War.

A conducted tour of the cemetery is run by the Friends of Nunhead Cemetery, open to all, on the last Sunday of each month, starting from the Linden Grove gates at 2:15 p.m. At the centre of the cemetery are the remains of the Anglican Chapel, its roof gone but its stone walls intact.

The cemetery is the setting for the Victorian poet Charlotte Mew's exploration of death, insanity and social alienation In Nunhead Cemetery and is the setting for Maurice Riordan's final poem, The January Birds in The Holy Land, his 2007 collection. The Woman Between the Worlds, a 1994 science fiction novel by F. Gwynplaine MacIntyre set in Victorian England, depicts the burial at Nunhead Cemetery in 1898 (in a closed coffin) of a female extraterrestrial. The novel avoids citing a precise location for this grave, in case some reader believes that alien remains can be retrieved from the site.

The cemetery also featured in Episode 2 of the 2008 BBC series Spooks, although it was credited as Highgate Cemetery.

The cemetery features in a number of scenes in the 1971 movie Melody.

The cemetery was the location of a shoot in a 1995 episode of London's Burning.

Nunhead Cemetery is one of the Magnificent Seven. It is one of the two cemeteries located south of the river Thames (the other being West Norwood Cemetery).

The cemetery is easily reached with public transport via local buses and National Rail:

All content from Kiddle encyclopedia articles (including the article images and facts) can be freely used under Attribution-ShareAlike license, unless stated otherwise. Cite this article:
Nunhead Cemetery Facts for Kids. Kiddle Encyclopedia.